Have A Meaningful Deepavali - Friday in The STAR 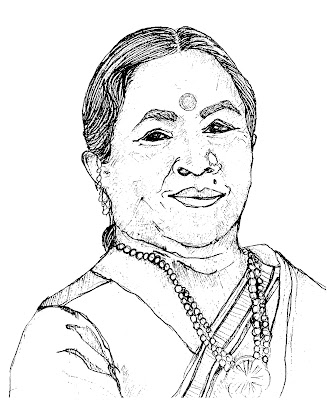 ‘Aachi’ Manorama (1937 – 2015) was a beloved cinematic icon who united people from all walks of life through her various roles.

Let us be Moderate: Be honest on both sides and avoid hypocrisy

In our Hari Malaysia message, we elaborated the fifth point of the Ten Principles for a Moderate Malaysian. For Deepavali, we would like to share the sixth principle. Do look forward to the upcoming four.

I will be honest on both sides. I will not be a hypocrite.

2.       Who are hypocrites?
Hypocrites are liars of the worst kind. This is because a hypocrite is a person who pretends to have virtues, morals and principles that he or she does not actually possess or believe in. A hypocrite twist and turn everything to win. They like to judge others with the highest of standards, but when it’s time to judge themselves, they bend according to circumstances to the point that the standards are barely there. This assures that the other side is always wrong, and they, always right. Hypocrites create moments of disunity. They are extremists and a liability to society. Hypocrites cannot stand feedback or even constructive criticisms. In fact, a hypocrite will be angry simply by reading this advertisement.

3.       How to be honest on both sides and avoid being a hypocrite?
Be honest and sincere. Make seeking the truth, being just and the practice of moderation as your core belief system. Always consider both sides of the argument. Better still, be creative and look for alternative options. Be stricter with yourself before you are strict with others. Practice what you preach and make sure your actions are louder than your words. Be moderate as moderation will steer you towards being honest on both sides. 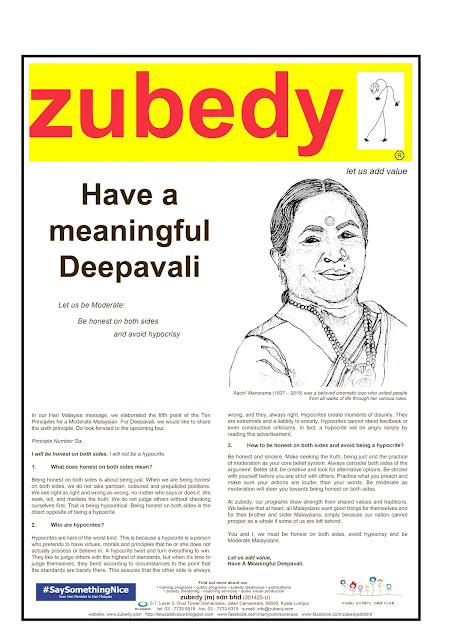 I was speechless to see an icon of silver screen, the late Manorama featured in your Deepavali greetings and message. Truly amazing how she has reached the masses. Even more profound is Zubedy's choice of artwork, that comes with a different, touching us very deeply and very differently.