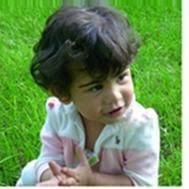 This is not a hoax, her uncle is a friend of mine.

On April 8, 2011, Shakirah Ariana was born in General Hospital Ampang, Kuala Lumpur with a rare condition called Heterotaxy Syndrome which majorly affects her heart. 1 in 4 million babies are born with this condition in the world. Ariana is sadly one of them. Ariana has a single ventricle defects which encompass a large spectrum of disorders, of which require 3 series of staged her surgeries. At present Ariana has undergone 2 heart surgeries:

Since these surgeries, Ariana is thriving and is doing amazing. She is on track with all her development milestones. Just like any other healthy toddler, Ariana has her favourite hobbies too - she loves to play with her cousins, loves everything about the beach (the sea, the waves, the sand :)), swimming when her mommy allows her, loves the playground and even loves to bake cupcakes!

Ariana turned 3 in April 2014, and requires her final stage surgery- the fenestrated Fontan. Given the medical options for Ariana in Malaysia is limited, Ariana is scheduled to have this surgery at Boston Children’s Hospital (BCH) early August 2014. BCH has graciously agreed to discount this surgery from approximately USD$1 Million++ to USD$108,480. Ariana’s mommy (a single mom) will need to raise approximately RM380,000/= to pay for Ariana’s surgery and associated expenses by July 2014.

Ariana and her mommy needs your help to make this happen and a chance for Ariana to lead life to the fullest. For those who wish to contribute, you may do so by the following methods:

Your prayers and contributions are sincerely appreciated.