JUST Seminar: World Beyond War: The Rohingya Refugee Crisis and its Implications on Security in the ASEAN region

Warm greetings from the International Movement for a Just World (JUST)!

JUST is  a co-sponsor of the “World Beyond War” conference and festival of events in Washington, D.C. on the weekend of 23-25 September 2016. Leading thought leaders, activists, and intellectuals from throughout the world will be participating in this important event.

Towards this end, we are pleased to announce that JUST will be organizing a major seminar on “World Beyond War: The Rohingya Refugee Crisis and its Implications on Security in the ASEAN Region” on the 24th of September 2016 at the Institut Integriti Malaysia (IIM) in Kuala Lumpur, and would like to cordially invite you, your colleagues, students, and friends to be participants at the said event.
Details of the seminar’s program are as follows:
Date of forum: 24th September 2016 (Saturday)
Time: 8.30am -1.00pm
Venue: INSTITUT INTEGRITI MALAYSIA (IIM), Persiaran Tuanku Syed Sirajuddin, Bukit Tunku, 50480 Kuala Lumpur, Wilayah Persekutuan Kuala Lumpur, Malaysia

We plan to present the findings, conclusions and recommendations of the seminar to the UN Secretary- General, the ASEAN Secretary-General, and the Malaysian government, so the appropriate steps may be taken.

We are confident that you will both benefit immensely from the discussion on this crucial issue, as well as contribute to the richness of the deliberations in substantive ways. JUST loves to see its supporters and those critically engaged with the most pressing issues in the world today at its events, so we hope to see you here.

To confirm your attendance, please complete the attached reply slip, and RSVP JUST’s Program Coordinator, Hassanal Noor Rashid at hassanal@just-international.org before the 20th September 2016.
Please note that spaces will be limited to 100 participants, so please confirm your attendance as soon as possible to reserve your seats.

We look forward to your response and participation.
Warm regards,

Concept Note
The International Movement for a Just World (JUST) will host a seminar in September 2016 as part of its support for a global nonviolent movement entitled ‘World Beyond War’, based in Washington D.C., to end war and establish a just and sustainable peace. The organization of the seminar in Kuala Lumpur supports a major World Beyond War event in Washington, D.C. scheduled for 23-25 September 2016, just after the International Day of Peace. This note provides the concept for the JUST seminar as well as its scope and strategic contribution to the World Beyond War movement.
The seminar will provide an opportunity to assess the Rohingya refugee crisis in Myanmar, from the perspective of non-traditional security (‘NTS’) challenges, and its nexus to inter-state cooperation in the South East Asian region. The NTS challenges are non-military areas that expand the security agenda beyond its traditional remit of state and military security such as undocumented forced migration, transnational organized crime i.e. people smuggling, human and narco trafficking, food shortages and infectious diseases. These challenges are amplified by the forces of globalization, and exceed the capacity of individual states in the region to effectively resolve them, which can lead to conflict or war.
Despite garnering significant public attention in 2015 over the boat crisis, Rohingya refugees are not welcomed by other countries in ASEAN, as they are increasingly viewed as possible threats to national security associated with rise of terrorism and transnational crime, in addition to being seen as an economic burden. The actions taken at the regional level by ASEAN to solve the Rohingya refugee crisis are focused on stemming the flow of refugees into their countries rather than addressing its root causes.
A strong, multilateral co-operative approach in the region is urgently needed, in line with ASEAN’s ‘people first’ policy, to halt the catastrophic unfolding of genocidal acts against the Rohingya. The formulation of an ASEAN comprehensive framework of action must also be considered, through a range of humanitarian, security, political, legal and development initiatives involving governments, international organizations and civil society actors. The framework should place emphasis on the human security of individuals in the region through preventive diplomacy and conflict management, including serious examination of root causes for the flight of Rohingyas. The impetus for such a response within ASEAN has already begun, with the recently published report on “The Rohingya Crisis and the Risk of Atrocities in Myanmar”, by the ASEAN Parliamentarians for Human Rights[1]. The report describes the Rohingya refugee crisis as an ASEAN problem, and ASEAN-wide challenge, setting out a “Call to Action” by outlining ten action points for consideration.
Background
The United Nations considers the Rohingya as one of the most persecuted groups in the world. Their humanitarian condition is worsened by their official statelessness in Myanmar, deprived of citizenship as Myanmar considers the Rohingya to be immigrants from Bangladesh and West Bengal. The situation has deteriorated to such a degree that a recent report by the International State Crime Initiative (ISCI) at the Queen Mary University of London[2] states that the Rohingya are facing the final stages of genocide. The report makes reference to decades of persecution which have taken on a new and intensified form since the emergence of mass killings in 2012. The marked escalation in what has been described by the report as state-sponsored stigmatization, discrimination, violence and segregation, and the systematic weakening of the community, make precarious the very existence of the Rohingya. Another recent report prepared by the International Human Rights Clinic at the Yale Law School for Fortify Rights[3] has concluded that there is strong evidence that genocide is being committed against the Rohingya by security forces, government officials, local Rakhine residents and others.
In desperation, the Rohingya have turned to people smugglers and boarded boats in Bangladesh and Myanmar, hoping to reach safety and seek refuge in other ASEAN countries. This mass refugee movement has fuelled a thriving human trafficking trade that include the establishment of jungle camps along Thailand’s border with Malaysia. These camps which contained mass graves were discovered by Thai authorities in 2015, resulting in boats filled with refugees being abandoned and set adrift at sea by trafficking rings, necessitating rescue operations by Malaysia and Indonesia. Following this, the Thai government organized a “Special Meeting on Irregular Migration in the Indian Ocean” on 29 May, 2015 in Bangkok in recognition of the need for stronger multilateral cooperation to address the Rohingya refugee issue.
[1]ASEAN Parliamentarians for Human Rights (APHR), The Rohingya Crisis and the Risk of Atrocities in Myanmar: An ASEAN Challenge and a Call to Action, April 2015, http://www.aseanmp.org/wp-content/uploads/2015/04/The-Rohingya-Crisis-and-the-Risk-of-Atrocities-in-Myanmar-An-ASEAN-Challenge-and-Call-to-Action.pdf
[2] Green P., Macmanus T., de la Cour Venning A., Countdown to Annihilation: Genocide in Myanmar, London: International State Crime Initiative, http://statecrime.org/data/2015/10/ISCI-Rohingya-Report-PUBLISHED-VERSION.pdf
[3] Lowenstein, K. Allard, (2015), Persecution of the Rohingya Muslims: Is Genocide Occuring in Myanmar’s Rakhine State?, International Human Rights Clinic, http://www.fortifyrights.org/downloads/Yale_Persecution_of_the_Rohingya_October_2015.pdf 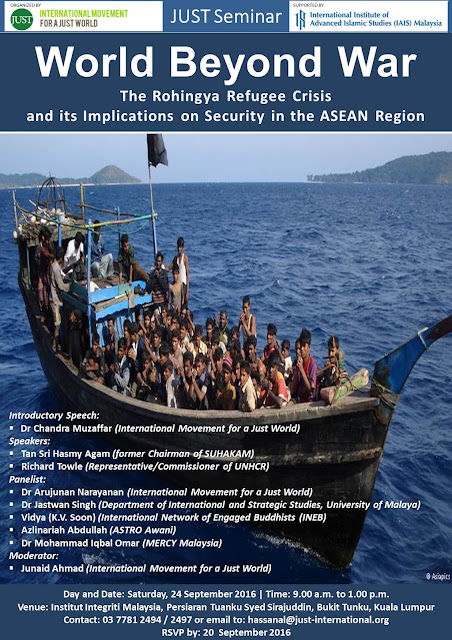