IS AL-BIRR A NEGLECTED KEY CONCEPT IN ISLAM?

A Quranic analysis of the term Al-Birr in surah Al-Baqarah 2:177

In the mid 90’s I became aware of a very important verse in Chapter 2 of the Quran, Al-Baqarah 2:177. It became one of my favorite verses and since then I have spent a lot of time studying and researching about it. The verse provides one of the most complete and directly worded (muhkamah, not a mutashabihah) revelation spelling out what, who, when and how a person and the community can practice and pay attention to Al-Birr.

In this article, I would like to explore, study, investigate and examine what is the Quranic point of view of Al-Birr and propose a more definitive meaning and application of Birr. I wish to shed more light about Birr anchoring my discussions on verse 2:177 mentioned while at the same time cross referencing a few other key verses and related occurrences of the term Birr based on its Arabic root word BRR (BaRaRa).

Be that as it may, a short article like this cannot do justice to a deep and significant concept as Birr and its relationship to other key terms from the Quran (refer below). I am happy to inform readers that a more detailed and scholarly work is under way as my masters/PHD thesis at a local university.

WHY STUDY ABOUT AL-BIRR?

It is important to note that verse 2:177 links Al-Birr to three other key concepts in the Quran and Islam namely, Iman (Believe), Sidq (Sincere) and Taqwa (God-Consciousness). Not to mention also, other key terms and concepts within them like the believe in Allah, The Last Day, Malaikah, Al-Kitab, The Prophets, Sedekah, Solah, Zakah, Keeping to Promises, and Sabr.

While Iman and Taqwa and to a certain extend Sidq are well deliberated and spoken within the Muslim world, especially Iman, Al-Birr have not been given adequate attention. This article would like to minimize this gap.

I also find it of great significance that Al-Baqarah 2:177 places Al-Birr as the all-embracing, overarching, all-encompassing – basically the umbrella and the principal concept that holds together and connects the three other key terms mentioned– Iman, Sidq and Taqwa.

It seems Al-Birr plays a major role in pulling together what it is to practice Iman (Believe) and what it takes to be a Sidq (Sincere), who is a Muttaqoon (God-Consciousness) and all the other key concepts and terms mentioned above. (refer to attachment 1 for the verse). 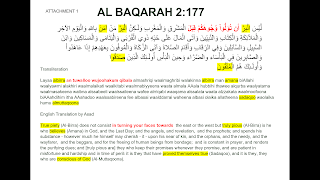 Therefore, it is important that we become more aware of the term and concept Al-Birr and what it takes to be an Abrar, a person who practices Birr.

HOW COME WE HARDLY HEAR OF AL-BIRR?

If AL-BIRR is such an important term and concept, why then it is not known, discussed and mentioned at the popular level? Personally, I feel that Al-Birr as a key concept in Islam is either neglected, forgotten (perhaps a more politically correct description would be, “hidden”) or substituted with other terms like piety and righteousness or virtue.

This is especially true if you only read translations of the Quran – like many non-Arabic speaking Muslims do. The former confuses us with Taqwa while the latter lacks a wider and deeper meaning of Al-Birr. In the Arabic speaking world, Al-Birr is also usually explained as ‘good’ – which the Quran has other more closer terms like Ma’ruf, Khayr and Hassan. In the Malay translation, Al-Birr is usually rendered as simply “kebajikan”.

As mentioned, the root word for Al-Birr is derived from the root word Ba-Ra-Ra which means the forest or dry land – signifying vastness and broadness, expansive, forever growing, fertile and save land, infinite. Al-Birr is therefore by itself a concept that describes something of immense and vast implications and standing.

At Quran 52:28, Al-Birr is stated as an attribute of Allah – Al-Barru Al-Rahimu while at Quran 80:16 the Quran is guaranteed was borne by the hands of scribes,noble and Bararatin (usually translated virtuous/pious, which I see as limiting and incomplete and perhaps even incorrect).

Therefore, as stressed earlier, it is not a surprise that the Quran places Al-Birr as the principal and central conceptual term at Al-Baqarah 2:177 where Al-Birr is directly shown as the glue that holds together the practice of Iman (Believe) and linking key behavioral patterns and framework of believe that makes a person a Sidq (Sincere) and Muttaqoon (God-Consciousness). (Refer attachment 2) 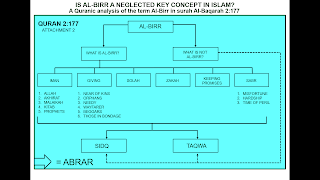 If I am correct, the practice of Birr can bring infinite chain reactions of positive results and an Abrar is the human catalyst of great and infinite change. Being an Abrar, is then the ultimate aim of humanity and the goal of an ambitious, talented, capable and thoughtful Muslim.

WHAT DOES THE QURAN SAYS ABOUT ABRAR?

An Abrar has a very weighty place in the Quran. At Quran 3:193 we are told to du’a (pray) to Allah to let us breathe our last breath as an Abrar – the ultimate aim of a human being. Yes, a serious Muslim is asked to pray to die an ABRAR!

I see this prayer as pertinent for life here on earth as well as the hereafter. At Quran 2:177, the Quran showcases an Abrar as someone who can afford to give away his or her wealth not only to those who are near of kin, but to the orphans and needy, the wayfarer, the beggars and at the same time is able enough to free those who are trapped from bondage. As such, to die as an Abrar suggests that it is not enough for us to be successful in the hereafter, but we must also be successful today on earth (also refer Quran 2:201). An Abrar it seems, is one who is savvy both in the mosque as well as the boardroom – but at the same time not a niggard. A person who not only believe but also perform great deeds! A truly successful human being.

The entire chapter 76 of the Quran is themed to contrast between two groups of mankind, those who choose to be an Abrar (Quran 76:5) and those who choose Kufr (Quran 76:4) with more focus and attention on the former. Abrar being the successful one. Unfortunately, the chapter is named either Ad-Dhar (Time) or Al-Insan (Man) words taken from the first verse, although the majority of 31 verses in the chapter refers to Abrar. I wish our religious experts re-look and consider changing it.

HOW BIG IS THE GAP?

While at the scholarly level one may be able to find some serious writings about Al-Birr, at the popular level it is almost completely unknown or neglected. How many of you have heard of the term?

A quick check on google, books and writings about Islam both by Muslims and Non-Muslims sources alike would show the extreme lack of mention.

This is a huge loss. This is a big gap. Remember that we are to pray to end our lives as an ABRAR. In fact, we need not have to look farther to identify these obvious gaps.

Even if we put together the Five Pillars of Islam (Rukun Islam) and the Six Pillars of Faith (Rukun Iman) by the Sunni Muslims, we will still not complete the total scope covered by Al-Birr as outlined in Al-Baqarah 2:177.

While Rukun Islam added the shahada, fasting and pilgrimage to Mecca and Rukun Iman the belief in Qada and Qadar (Fate and Pre-destination), both these Sunni central pillars of Islam (the Syiah and other sects have a different combination for their pillars) and Iman fall short in key areas where we are asked to PAY ATTENTION TO within Al-Birr namely,

2.    Keeping of promises when a promise is made.

4.    The stress TO NOT PAY ATTENTION TO externalities as it does not fulfill the requirement of Birr.

WHAT ARE THE IMPLICATIONS?

I have strong convictions that these gaps have major impact on Muslim behavioral patterns, focus and what we PAY ATTENTION TO and as such to what we consider and see as more important - both at the individual and community level. Allow me to give you a socio-economic example.

While 3 of the 10 nations with the world’s highest GDPs per capita are Muslim-majority countries (Qatar, Kuwait and Brunei), but three of the 10 countries with the world’s lowest GDPs per capita also are Muslim-majority nations (Afghanistan, Niger and Somalia). Some oil-rich countries with Muslim majorities, particularly the Gulf states, have median GDPs per capita that are higher than that of the United States. Statistics of international organizations about poverty and human development places the Muslim majority nations amongst the most backward and poorest countries in the world, yet, Muslims globally spends billions of dollars each year for pilgrimage – an average of USD12 - 15 billion dollars annually. Luxury and expensive hotels have sprung up in Mecca, offering, among other extravagances, a view of the Grand Mosque.

While pilgrimage is important, could we have spent the money for the betterment of the family, the poor, the community and the world at large if we are more Birr?

I believe that the application of Birr at the individual, family, community, national and global level which have the possibility to cure many of the problems of humanity. For example, in “expending wealth, no matter how much we may love them” to the six categories of people mentioned, could be the core and fundamental policy for economics and social development that can eradicate poverty, human trafficking and modern-day slavery.

It is my hope that our religious experts and leaders will consider coming together to discuss ALBIRR and make Birr one of the central pillars in Islam. I am an optimist. After all the Quran 3:139 says,

“So lose not heart, nor fall into despair: For ye must gain mastery if ye are true in Faith.”