The Making of The RUKUN NEGARA - MPPI TALK SERIES 002

TO EDUCATE, DISCUSS AND PROMOTE THE EXCHANGE OF IDEAS 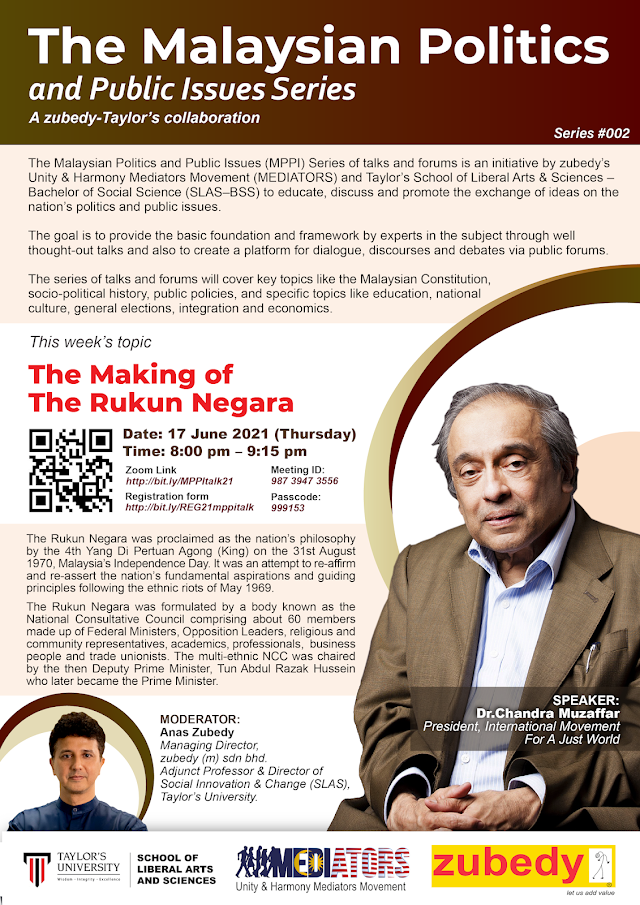 THE MALAYSIAN POLITICS AND PUBLIC ISSUES (MPPI) SERIES
– a zubedy-Taylor’s collaboration
The Malaysian Politics and Public Issues (MPPI) Series of talks and forums is an initiative by zubedy’s Unity & Harmony Mediators Movement (MEDIATORS) and Taylor’s School of Liberal Arts & Sciences (SLAS) to educate, discuss and promote the exchange of ideas on the nation’s politics and public issues.
The goal is to provide the basic foundation and framework by experts in the subject through well thought-out talks and also create a platform for dialogue, discourses and debates via public forums.
The series of talks and forums will cover key topics like the Malaysian Constitution, socio-political history, public policies, and specific topics like education, national culture, general elections, integration and economics.
This is the SECOND of our series. I hope you will join us in our series of talks and forums.

TOPIC : The Making of The RUKUN NEGARA

" The Rukun Negara was proclaimed as the nation’s philosophy by the 4th Yang Di PertuanAgong (King) on the 31st August 1970, Malaysia’s Independence Day. It was anattempt to re-affirm and re-assert the nation’s fundamental aspirations and guiding principles following the ethnic riots of May 1969.

The Rukun Negara was formulated by a body known as the National Consultative Council comprising about 60 members made up of Federal Ministers, Opposition Leaders, religious and community representatives, academics, professionals, business people and trade unionists. The multi-ethnic NCC was chaired by the then Deputy Prime Minister, Tun Abdul Razak Hussein who later became the Prime Minister."