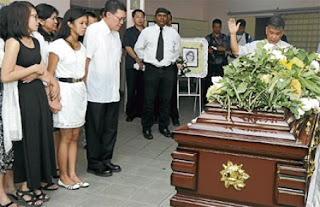 It is indeed tragic that Irene Ong Ai Siam was killed in an attempted robbery which horribly turned into a murder. Four suspects have been arrested in connection with the incident at Bukit Gasing. The four, aged between 16 and 18, were detained by police at Flat Sri Medan and Flat Bukit Gasing Indah within two days of the incident.

Following the murder, the Police have announced that a mobile beat base will be stationed in Bukit Gasing from today Saturday 27th April to ensure safety. The mobile beat base would operate for six hours every day from 7am to 10am and from 4pm to 7pm. It will also operate on weekends and public holidays.


In collaboration with residents associations, the police have also created a volunteer group comprising joggers in the area to mentor those who have just taken up the activity.

Now comes the even more tragic part. Instead of allowing the grieving family space to deal with their loss, we have some people with vested interests who have swooped to take advantage of this sad incident to put the grieving family into the national spotlight to further their own agenda.

Read about it here

.
After 56 years as a nation, one would have thought that Malaysians would have learnt our lessons and learnt to live together. As we seek more democratic freedoms, we must be prepared to give and take without politicians and their agents resorting to the peddling of hate.

This is a general election where the call for change must be through the ballot box and not through the politicizing of unfortunate victims of crime.

The Spanker accepts that it is a valid election tactic to stoke the emotions of the rakyat so that they will vote for you but those doing the instigation must also know when to pull their punches so that things do not go overboard.

Politicians, well known for their oratory capabilities, owe it to the country to make sure that in their politicking, they also condemn such acts of crime and senseless violence which are simply not the Malaysian way.

Many politicians on both sides of the divide are really of no help as many only want to pursue their own agendas by hijacking the current red hot issue of crime as a free ride to popularity, given the fast looming general elections.

Bashing the Government, its various agencies and the cops is easy peasy but public apathy has also been identified as one of the reasons why criminals have become more brazen in committing crimes. Fighting crime isn’t the prerogative of the police alone.

There is no doubt that the responsibility for fighting crime rests squarely on the shoulders of the PDRM. That’s what they’re paid for right? The truth of the matter is that there are simply not enough cops to cover every single area.

Read more on this article
Posted by anas zubedy at Saturday, April 27, 2013

I think you are just being superficial. Crime is a complicated matter. Why people resort to crime? People resort to crime not because it is their hobby but because they have no other way to find a living. It is the failure of our government policies especially those related with economy and education which had failed our rakyat that makes the crime rate increase. The widening of rich poor gap due to massive corruption and cronyism render the deterioration of education and quality of life which force certain segment of rakyat resort to crime. This also apply to the deterioration of policing quality in terms of there welfare and hence the quality of their work. So it is very correct to blame the government for this mishap.

the perpetrators are kids... so who do we blame? police? society? teachers? parents? these kids will be in juve.. then they are released, if the death sentence does not apply for them... so what now? who do we need to reach? how do we do that? why do these kids do these things? did we fail them or are they just born evil?

why no political side ever address these problems constructively? why blame the police all the time.. enforcement is one thing but we need to educate our kids ...
maybe some parents are not fit to be parents coz they are kids themselves...

why is crime a complicated matter... what is wrong is wrong, no matter what the reason given.. so are you saying that it is ok to steal and knock someone senseless, just because you are poor, and are unable to work making an honest living...although for someone to resort to stealing and murder sounds like the works of an able-bodied person... so why need to blame the government?
that is so stupid reasoning..
so, it's ok to be poor coz you can always blame others for your own failings, and also it gives you the right to harm others..
honest working people have no rights...
and are you saying that rich people also have no rights in Malaysia...

why don't you point the finger to yourself first, the ask what have you done to reduce crime..

don't blame the system, when it's the very rakyat (who maybe from the opposition) who failed to honour their responsibilites, eg parents, educators, community...and not forgetting the perpetrators themselves.

crime is wrong, simple as that..

I think the commenters here totally missed the point of your article, anas.