Integrity And Other Agendas by Dr. Chandra Muzaffar

The greatest tribute that Malaysians can pay to the memory of Kevin Morais and others like him who had sacrificed their lives fighting against the abuse of power is to protect and strengthen those institutions tasked with ensuring that integrity and good governance define our identity as a nation.
Each and every one of those institutions --- from the Malaysian Anti-Corruption Commission (MACC) to Bank Negara --- is under some sort of stress and strain today.  Fulfilling their amanah (trust) --- doing what they are required to do by law and convention --- has become a major challenge.  Why are they in such a situation today?
One, we continue to be burdened with a neo-feudal psychology which accords precedence to  unquestioning loyalty to a leader, however wrong he may be, over allegiance to values, principles and institutions associated with integrity.  The neo-feudal leader himself expects such blind loyalty and cultivates it assiduously through material rewards and allurements.
Two, in a society where communal consciousness is pervasive there is always a tendency among a significant segment of society to demonstrate fidelity to communal identities, institutions and personalities. Such fidelity often results in the subordination of values such as integrity and honesty.
Three, when loyalty to communal identity becomes obsessive, it is not difficult to whip up fear and hatred of the other to a point where collective fear overwhelms concern for integrity or righteousness. The manipulation of fear, by no means confined to ethnic and religious sentiments, is sometimes a tool that elites employ in order to perpetuate their power.
Four, when a party has been dominant for a long while  --- as the Barisan Nasional was until 2008 --- and has not been held in check by a culture of accountability and transparency, it develops a mindset that is dismissive of anything that questions its exercise of power. Integrity is often the victim of such a mindset.
Five, a major episode in the life of a nation that devastates the integrity of a vital institution of governance can weaken the principle and practice of amanah in society as a whole for decades to come. This is what happened in Malaysia in 1988 when the head of the Judiciary was removed on flimsy, fabricated charges and senior judges dismissed.
For all these reasons, institutions which are expected to preserve and protect values and principles such as truth, justice, integrity and honesty have not been able to function as well as they should. The investigations into 1MDB and the 2.6 billion ringgit in the Prime Minister’s personal bank account which have been hampered and hindered by various moves and manoeuvers underscore this. In more concrete terms, the PAC has been immobilized. There is still no action on the report submitted by Bank Negara to the Attorney-General which called for enforcement. There has been very little progress in apprehending key individuals wanted in both the 1MDB and 2.6 billion investigations. The Prime Minister has yet to sue the Wall Street Journal for alleging financial improprieties on his part.  Those who are concerned about integrity in public life are understandably disillusioned about the whole situation. This may explain why some of them may have sought external avenues to address the malaise.
There is no doubt at all that foreign actors who are focusing upon the current controversies in Malaysia have their own agendas. Given the orientation of the Wall Street Journal, the New York Times and the Washington Post, one is not surprised that they are exploiting the controversies to achieve their own goals which may include regime change in Putrajaya --- a possibility which I had alluded to in an article on 17 February 2015. Apart from Prime Minister Najib Razak’s explicit support for Hamas which has incensed Israel and its backers in the United States, it is also quite conceivable that Malaysia’s military cooperation with China reflected in the four day joint naval exercise between the two nations in the strategic Straits of Melaka from 18 September 2015 --- the biggest that China has conducted with any ASEAN state --- has upset some circles in Washington D.C. It has also been argued that the targeting of Najib in the US media may be part of the attempt to ensure that Malaysia signs up to the Trans-Pacific Partnership (TPP) Agreement.
Whatever the motives, it is obvious that the Malaysian government’s acts of commission and omission on 1MDB and the 2.6 billion ringgit account have provided foreign manipulators with a lot of ammunition to hit Najib. This is why it is extremely urgent to tell the whole truth. The yet to be completed report of the Auditor-General which would be the basis for the reconstituted PAC to finish its work, and the finalization of the MACC’s investigations, together with Bank Negara’s report which is with the Attorney-General, should reveal the truth about 1MDB and the 2.6 billion account. Foreign investigations may also help.
The Malaysian people should send a clear message to our government. The investigations into the two related controversies should be closed and the whole truth should be made known to the nation and the world by the end of this year. To allow the controversies to drag on into 2016 will only bring our nation to the edge of the precipice.

Dr. Chandra Muzaffar has been writing and speaking on integrity in public life since the nineteen seventies.
Kuala Lumpur.

Of UMNO Malays and Cina DAP.

Ten things to ponder about the terms UMNO Malays and Cina DAP.

1.     Both terms UMNO Malays and Cina DAP when used in a malicious way are racist remarks.

2.     I know many from both UMNO and DAP sides - UMNO Malays & Cina DAP who are not racist and are multi-racial in their outlook.

3.     Just because we put UMNO in front of the word Malays & DAP before the word Cina, it does not mean we are not being racist when we make nasty racial remarks about them.

4.     Many closet racists are those who pretend to only target UMNO Malays or Cina DAP when they want to make racist remarks.

5.     Many racist politicians hide their racist politics by pretending to target only a racial group within a particular political party   - so they use terms like UMNO Malays or Cina DAP.

6.     Both terms are a sly, convenient and deceiving way to hide a racist heart.

8.     It is an ultimate weapon of political strategy that allows racism to be propagated while at the same time hide behind a multi-racial façade.

9.     Closet racist politicians who are hiding behind these terms should come out of the closet or stop using them to prove otherwise.

10. Followers of political leaders who use such terms must wake up and tell those leaders to quit using racist strategies.

Let us stop racist politics. Thanks.

Posted by anas zubedy at Sunday, September 20, 2015 No comments:

Have A Meaningful Hari Malaysia - Monday in The STAR

Let us be Moderate:  First, be critical of ourselves and our own community

In our Hari Raya Aidilfitri message, we elaborated the fourth point of the Ten Principles for a Moderate Malaysian. In this advertisement, we are happy to share the fifth principle. Do look forward to the upcoming five.

1.    What is the basis of this principle?
It is THE SUCCESS FORMULA recommended by all of our traditions and spiritual teachings. The Bhagavad-Gita suggests for us to reshape ourselves through the power of will. Tao Te Ching observes that to conquer others we need strength, but to conquer oneself is harder. Dhammapada states that it is easier to conquer a million men in battle than to conquer oneself. The Bible asks us to remove the plank in our eyes, in order to remove the speck that is in our brother’s eye. The Quran decrees that God will never change the fate or condition of a people until they change it themselves.

3.    Why this principle?
When we are the first to correct our own community’s mistake, we create strong bond between all, regardless of race or religion. When we are the first to critique those from our own community, we show clearly that what we are fighting for are shared values like truth, love and justice. Such behaviour encourages fairness and helps create deep Moments of Unity.

You and I, we must always be critical of ourselves and our own community first and be Moderate Malaysians. 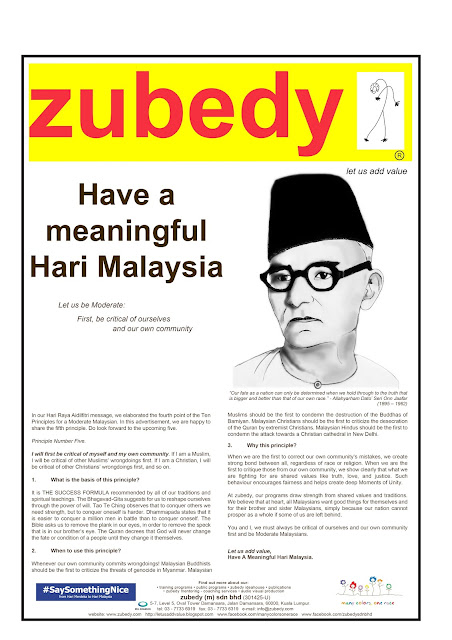 Posted by anas zubedy at Friday, September 11, 2015 No comments:

Race relations and the Federal Constitution by Prof. Shad Saleem Faruqi - The STAR

this article was taken from The STAR
Posted by anas zubedy at Thursday, September 03, 2015 No comments: