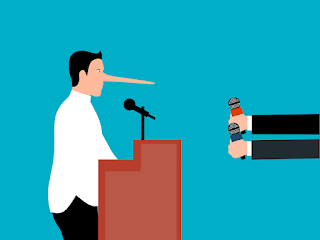 Six Reasons Why Politicians Believe They Can Lie - by Jim Taylor Phd.

Do politicians really think they won't be caught when they lie? 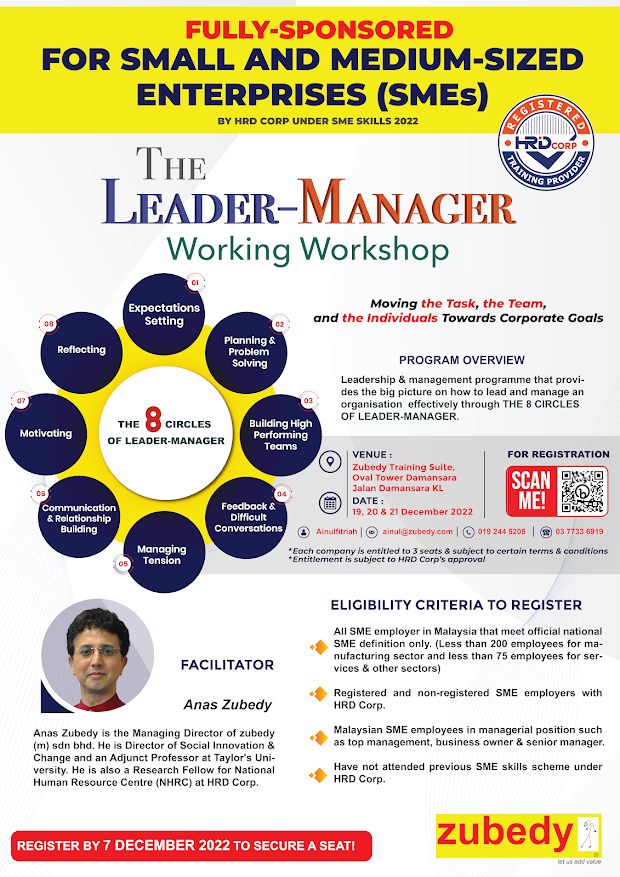 Hi guys, I have limited seats for this workshop that we normally organise for Senior Managers and Top Talents at MNCs and GLCs. The Public Program price per pax is RM 4770.00. So, this is a really unique chance.
This one is fully sponsored by HRDC for Senior Managers and above - ONLY FOR SMEs.
We have a few more seats left, its a first come first serve basis. Please do not call or contact me directly but click this link to register https://forms.gle/1CxH5YZKfApjmp9d8 . This is to ensure fairness and we follow the first come first serve approach.
Thanks, anas
Posted by anas zubedy at Thursday, December 01, 2022 No comments: 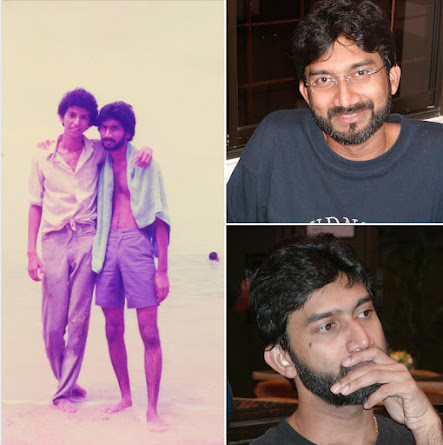 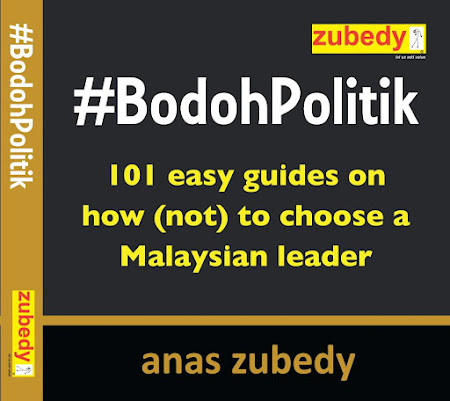 I wrote this book back in 2012 before GE13. I dedicated the book to Clever Malaysians. Amazing how things hasn’t change. LOL!

‘If I had no sense of humour, I would long ago have committed suicide’ - Mahatma Gandhi -

In order to make sense of the world and … our politics, we must know how to laugh, especially at ourselves. If we lose our ability to laugh, we know that something is dead wrong.

#BodohPolitik: 101 easy guides on how (not) to choose a Malaysian leader is a light-hearted way to look at our politics. Humour is a way to unite us. People who laugh together, stay together. So let’s have a laugh at ourselves, knowing fully well that idiosyncrasies from any political divide at the end of the day represent all of us – Malaysians.

Download the E-Book here http://bit.ly/3EKJKwc for free. Share it with friends and family as ‘Many a true word is spoken in jest’ - English proverb 😊

Posted by anas zubedy at Wednesday, November 30, 2022 No comments:

Are you an educated or learned person?

Malaysia has a high rate of educated people but perhaps not those who are learned. A learned person is able to differentiate between right and wrong, what is wasteful and what is productive, is fair, balanced and are able to be honest on both sides.
Educated people only have information and use them to prop up what they see fit.
For example, an educated person may support their leaders even when they are dishonest and inconsistent, but a learned person on the other hand will support even an enemy when the enemy is right.
This is because learned people can make sense of right and wrong. They have ethics and believe in integrity. They care about values - good values.
So which one are you?
Peace, anas
Posted by anas zubedy at Tuesday, November 29, 2022 No comments: 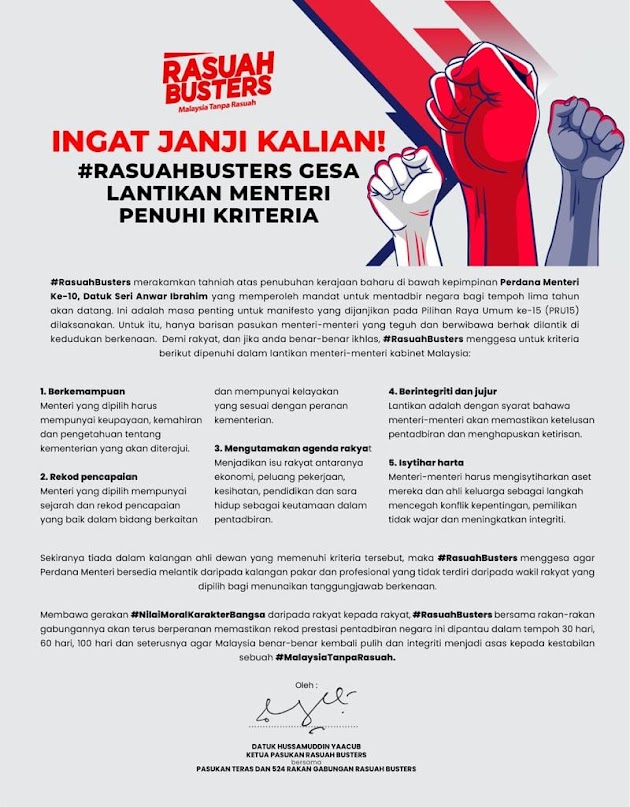 CHOOSING A PM AND HIS CABINET - WHAT MUST WE LOOK FOR?

" Leadership must come with integrity - there is no compromise. Without integrity talent is a liability. "

I would like to share with you a method I designed for the corporate leaders in choosing Top Talents for their organization. We call it C.A.P.I., making it easy for recall. I hope it will help you choose the best leaders for Malaysia especially our PM,DPM and Ministers.
CAPACITY
A person’s capacity is the basic foundation of his or her ability to deliver. No amount of training or exposure can bring out what is expected from a talent if he or she lacks the capacity.
Like a car engine, capacity determines the ability to perform under different circumstances. The larger the capacity, the greater the propensity to deliver.
We cannot ask a 1.0 Liter 3 cylinder 96HP PERODUA to deliver like a 4.6 Liter V8 310 HP Lexus GX. That would simply be sending the person to failure.
When the leader fails, our country suffers.
ACHIEVEMENT - PERFORMANCE
True achievement is about results; not efforts, not promises, not words. Top talents focus their energies on where the results are, they make things happen, they deliver. They spend more time doing and delivering. They don’t talk as much as they do. When they talk, it is to engage people to perform. They want to get things done, make things right. They lead people to actions that are based on clear goals. We must choose leaders that deliver.
PEOPLE SKILLS
Top talents deliver through working with and through people. They harness and focus the energy of others toward common goals. They are team leaders. Talent who prefers working alone are specialists and they are great support for top talents. Remember that we must choose talents that work with others in their effort to move up in an organization, not rise up by stepping on them. The latter will cause future disunity to the team.
In the Malaysian context we must also choose leaders who are willing to listen and work with not just a particular race, but every ethnic group. Not just with those in the Peninsular but also Sabah and Sarawak and vice versa. Care for those in urban as well as the rural areas plus willing to engage not just the old, but the middle aged and the young. In short, we must choose a leader that is with the rakyat, one that will work with us and care much about our well-being, not their position and power.
INTEGRITY
Leadership must come with integrity - there is no compromise. Without integrity talent is a liability. No matter how brilliant, knowledgeable or successful, lack of integrity disqualifies any and all talent for any leadership position. We must check their track record like their propensity to lie, practice double standards, say one thing and do the other.
In short in choosing our leaders, INTEGRITY IS THE FINAL SIFT that must not be put aside no matter what.
Peace,
anas zubedy
Kuala Lumpur.
Posted by anas zubedy at Sunday, November 27, 2022 No comments: 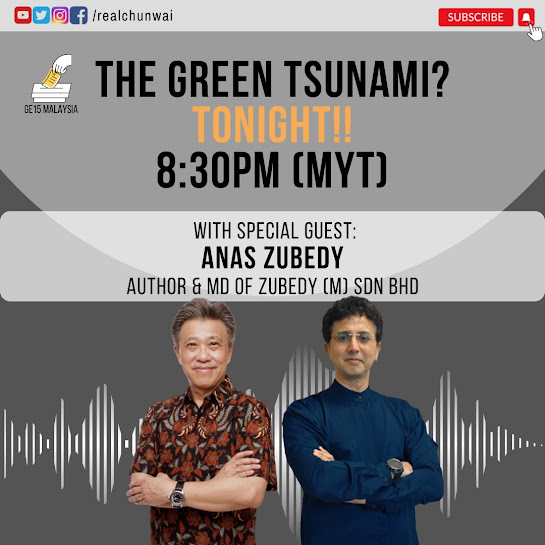 I have for some time wrote that Malaysia will turn more and more "Islamic" as a foregone conclusion.

So what is next?

Do watch the above  interview and read the 2013 article below.

“WHAT DOES TOP MANAGEMENT LOOK FOR IN TALENTS” 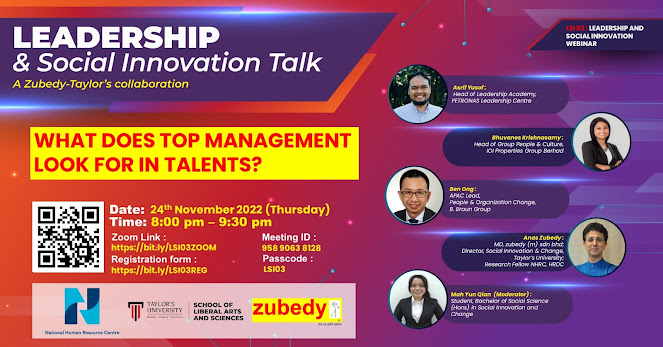 Posted by anas zubedy at Wednesday, November 23, 2022 No comments:

GE15 AND COALITION POLITICS IN MALAYSIA 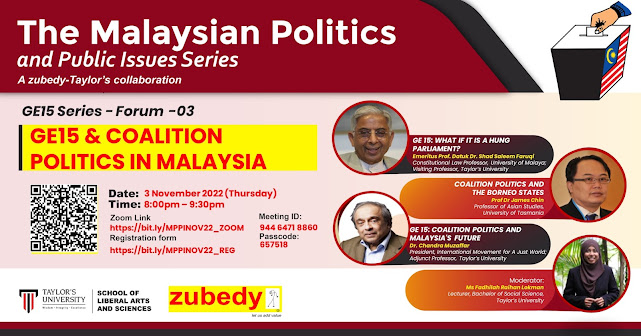 Prof. Shad, Prof James Chin and Dr Chandra will be unpacking these in 3 days’ time on Thursday November 3rd , 8pm .

HAVE A MEANINGFUL DEEPAVALI - Equality versus Equity 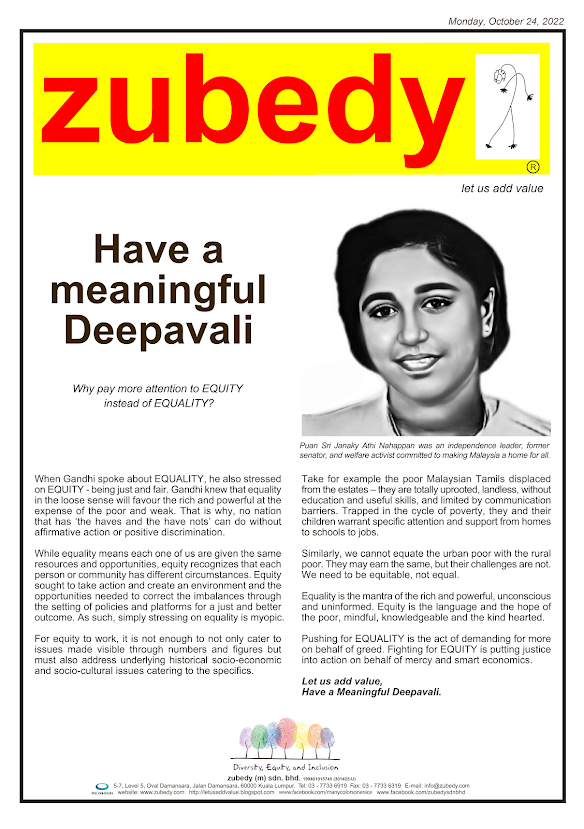 Why pay more attention to EQUITY instead of EQUALITY?
When Gandhi spoke about EQUALITY, he also stressed on EQUITY - being just and fair. Gandhi knew that equality in the loose sense will favour the rich and powerful at the expense of the poor and weak. That is why, no nation that has ‘the haves and the have nots’ can do without affirmative action or positive discrimination.
While equality means each one of us are given the same resources and opportunities, equity recognizes that each person or community has different circumstances. Equity sought to take action and create an environment and the opportunities needed to correct the imbalances through the setting of policies and platforms for a just and better outcome. As such, simply stressing on equality is myopic.
For equity to work, it is not enough to not only cater to issues made visible through numbers and figures but must also address underlying historical socio-economic and socio-cultural issues catering to the specifics.
Take for example the poor Malaysian Tamils displaced from the estates – they are totally uprooted, landless, without education and useful skills, and limited by communication barriers. Trapped in the cycle of poverty, they and their children warrant specific attention and support from homes to schools to jobs.
Similarly, we cannot equate the urban poor with the rural poor. They may earn the same, but their challenges are not. We need to be equitable, not equal.
Equality is the mantra of the rich and powerful, unconscious and uninformed. Equity is the language and the hope of the poor, mindful, knowledgeable and the kind hearted.
Pushing for EQUALITY is the act of demanding for more on behalf of greed. Fighting for EQUITY is putting justice into action on behalf of mercy and smart economics.
Let us add value,
Have a Meaningful Deepavali
Peace, anas
Posted by anas zubedy at Sunday, October 23, 2022 No comments: 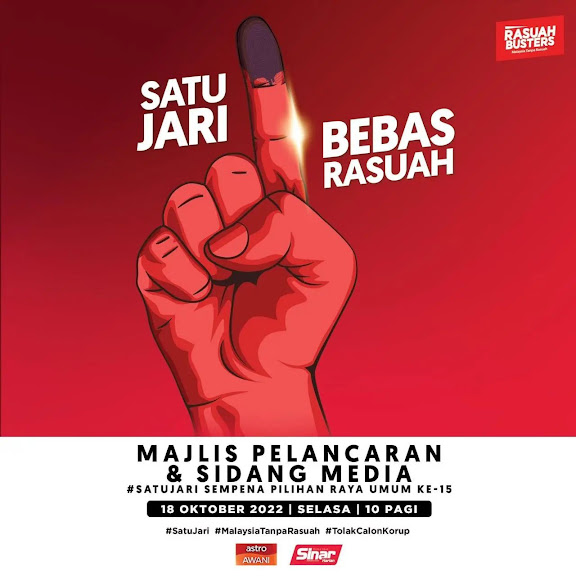 "WHAT DO LEADERS DO?" 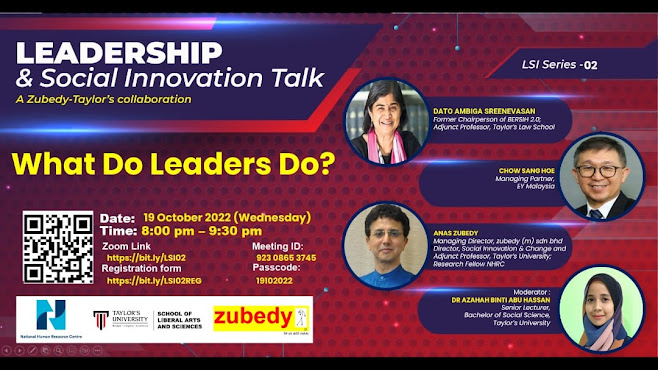