Malaysia in Conversation : POLITICAL DYNAMICS IN SABAH, SARAWAK AND SEMENANJUNG 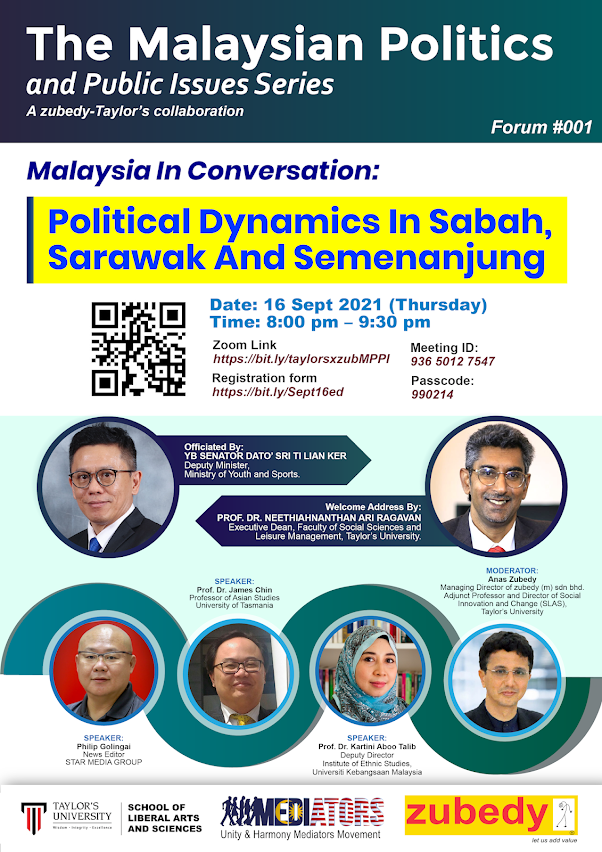 The mainstream Western media is full of news these days about people fleeing Kabul in the wake of the Taliban victory. Dramatic pictures of young and old scrambling to get on to jam-packed aeroplanes do make a huge impact. The message they convey is that a collective fear has gripped the Afghan people as they seek to escape the iron grip of an ‘oppressive and brutal regime’. The images also suggest that freedom and security await these fleeing refugees in Western capitals.

Many do not realise that these visuals serve to divert attention from another daunting reality: the humiliating defeat suffered by the US and its allies after a 20 year occupation of Afghanistan.
It was an occupation which according to Brown University’s Costs of War project devoured US 2.26 trillion dollars. At its height it employed 775,000 US service personnel. The US and its NATO allies had at their command some of the world’s most lethal and sophisticated weapons. Still, some 2.322 US military deaths occurred. As a result of US and NATO military operations in both Afghanistan and Pakistan, 240,000 deaths were recorded. Afghan civilian deaths were estimated at 47,245 while Pakistani civilian deaths hit 24.099.
3.5 million Afghans were internally displaced and there were 2.5 million Afghan refugees at the end of 2020.
In contrast, the Taliban had limited fire power. As Pepe Escobar put it, “They relied only on Kalashnikovs, rocket-propelled grenades and Toyota pick-ups --- before they captured American hardware these past few days, including drones and helicopters.” Except for a core, their guerrillas had only basic military training. It is estimated that the Taliban had 78, 000 fighters, 60,000 of them active.
There were also some fighters in Pakistan; otherwise, international support for the Taliban was modest. And yet, by the middle of August 2021, the Islamic Emirate of Afghanistan led by Taliban co-founder, Mullah Baradur Akhund was at the driving wheel.
What explains the Taliban’s success? A number of analysts regard their staunch faith in Islam as an overwhelmingly important factor. This faith is deeply integrated with their love for their land. This is why no foreign power has ever been able to sustain their conquest of Afghanistan. The British discovered this in the middle of the 19th century. The Soviet Union came to terms with this truth when it was defeated by the Afghan people in 1989, after a 10 year occupation and a loss of 60,000 soldiers. Now the Americans know why Afghanistan has been rightly described as “the graveyard of empires.”
Apart from faith, the Taliban also pursued a clever strategy of forging links with local chieftains and grass root communities. These links proved to be the bastion of local-level resistance to the American presence. The Taliban, a largely Pashtun group that resonated with the majority community, also reached out to the ethnic minorities such as the Tajiks, Uzbeks and Hazaras. This networking enhanced the standing of the resistance movement as a whole.
If we compared the Taliban with the US backed government and the US sponsored Afghan army, we begin to understand why public perceptions of the former and the latter were so different. Both the civilian and military elite linked to the US were seen as “puppets” and “stooges” of a foreign power. They had hardly any credibility.
To make matters worse, some of the elite further undermined the ruling class through rampant indulgence in corruption and abuse of power. It is alleged that a substantial portion of external aid given to the Afghan people were siphoned off by the corrupt elite for their own indulgence. Such malpractices widened the trust gap between the elite and their foreign backers on the one hand and the Afghan masses on the other.
There have also been occasions when the occupiers have displayed an utter lack of sensitivity to the norms and values that govern Afghan society especially its rural population. In their search for “ terrorists” US and other NATO troops have at times barged into rural homes in the middle of the night violating unwittingly the sense of propriety of women folk who may not be in their purdah at that time. Reports indicate that such instances have incensed both women and men and led invariably to an escalation of anger against the foreign intruder.
If a tragic chapter in Afghanistan’s history characterised by occupation and its concomitant woes such as cultural insensitivity and corruption has come to an end, can we hope for a new chapter to begin?
Before we can even contemplate the contours of a new Afghanistan, it is important to emphasise over and over again that military conquest and occupation is not the solution to any problem. It has not eradicated terrorism in Afghanistan or elsewhere. It has not brought development or meaningful progress to the Afghan people. How can it benefit people when it is obvious that often the occupier itself, sponsors, finances, trains and protects terrorists in pursuit of its own agenda--- its own agenda of hegemonic dominance and control.
This is why if there is any one lesson that we can all learn from the debacle in Afghanistan it is the evil of dominance and hegemony and its disastrous consequences. Through mass action --- demonstrations, assemblies and media mobilisation ---- the American people in particular should drive this message to the heads and hearts of their elites. Do not oust other regimes through force and violence.
Do not occupy other people’s lands. It is such a shame that since the end of the Second World War US elites have done this over and over again ---- in Vietnam, in Iraq, in Libya. They tried and failed in Syria. They do not seem to learn.
It is only the people’s will--- democratically expressed --- that can stop the insanity of these elites.
Dr Chandra Muzaffar is the president of the International Movement for a Just World (JUST)
Kuala Lumpur.
26th August 2021.
Posted by anas zubedy at Friday, September 03, 2021 No comments:

LESSONS FROM OUR GENERAL ELECTIONS 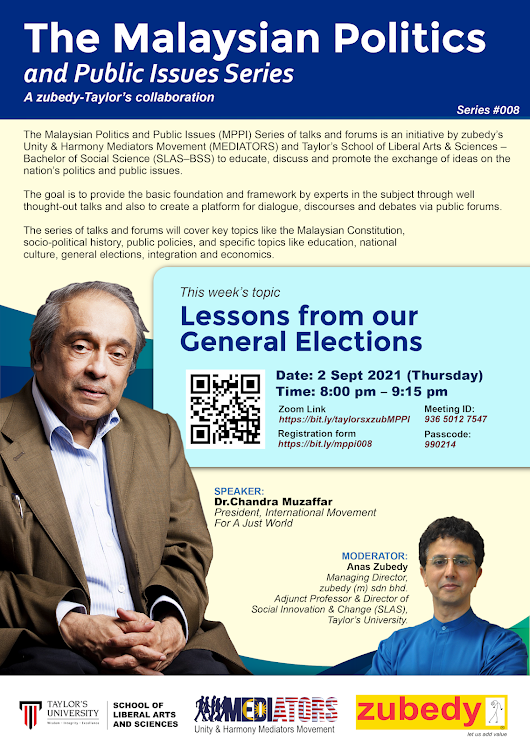 Posted by anas zubedy at Wednesday, September 01, 2021 No comments: 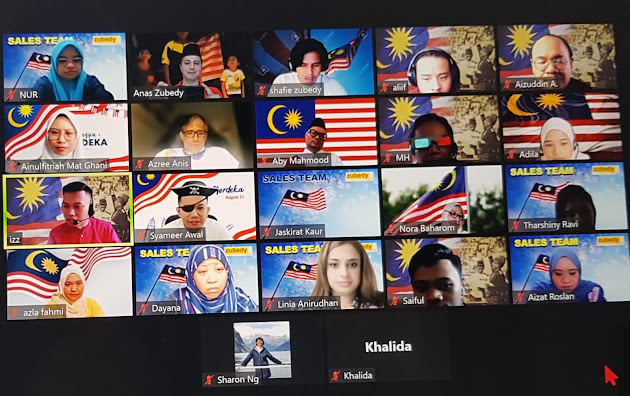 My dear Malaysians, we are Malaysia, a country that has from its inception chosen integration over assimilation, the rainbow instead of just one colour. As such, it is okay to organise a congress, meeting, political party, society and etc. based on race or ethnicity.
In Malaysia, each ethnic group is encouraged to bloom for the most part unhindered; Chinese speak Chinese, eat with chopsticks, and have Chinese names; Indians have Indian names and speak their own dialects; Malays follow their traditions, which are the core culture of this nation. So do our brothers and sisters is Sabah and Sarawak, be they Iban, Kadazandusun, Bidayuh, Melanau, Bajau, Murut and the other groups.
We want all the races in our rainbow nation to blossom, thrive and add value to the Malaysian supra-race while accepting that it is a functional cognisant goal, and strive to inculcate our children with the goal of being Malaysian by speaking, reading and writing our national language, Bahasa Malaysia, with ease.
As such, it is okay to be racial, to follow what our tradition dictates for our behaviour, beliefs and customs. It enriches and grounds us, and makes us feel safe and secure with who we are in relation to everyone around us.
But it is not okay to be racist, to think that our race is somehow superior to others and to dislike someone or some groups of people because of their ethnic background. That is plain ignorance and arrogance.
So, it is okay to organise a congress based on one’s ethnic grouping. But it is not okay to use it as a platform to threaten or bad-mouth the other.
So, let’s get that right.
“Our future depends on how well many different kinds of people can live and work together” – Tunku Abdul Rahman, Bapa Malaysia.
Peace,
ANAS ZUBEDY
Posted by anas zubedy at Tuesday, August 31, 2021 No comments:

THE WICKED MAN AND A CHILD 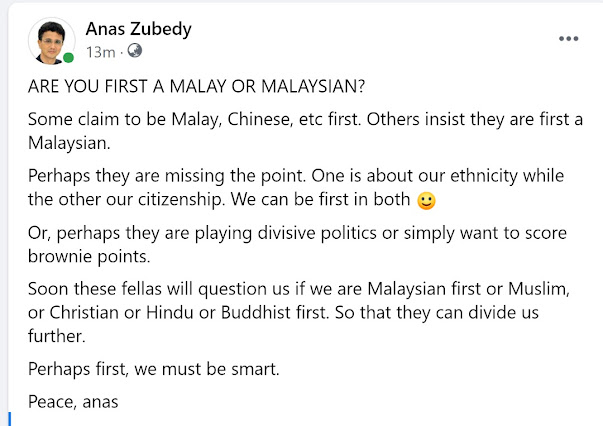 “Our future depends on how well many different kinds of people can live and work together.” 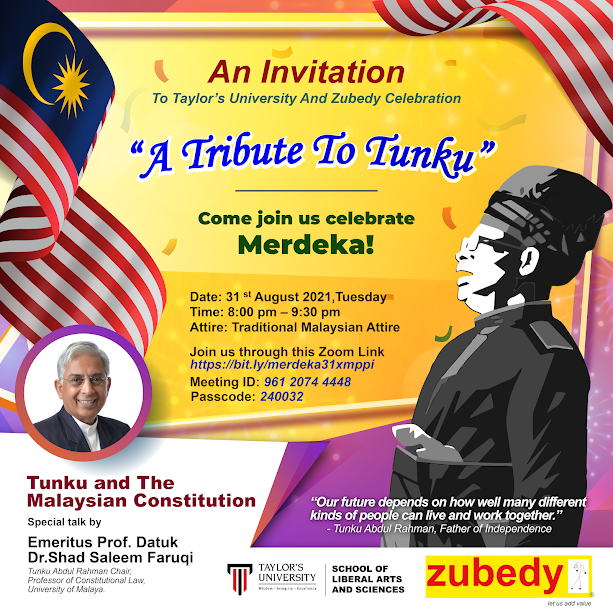 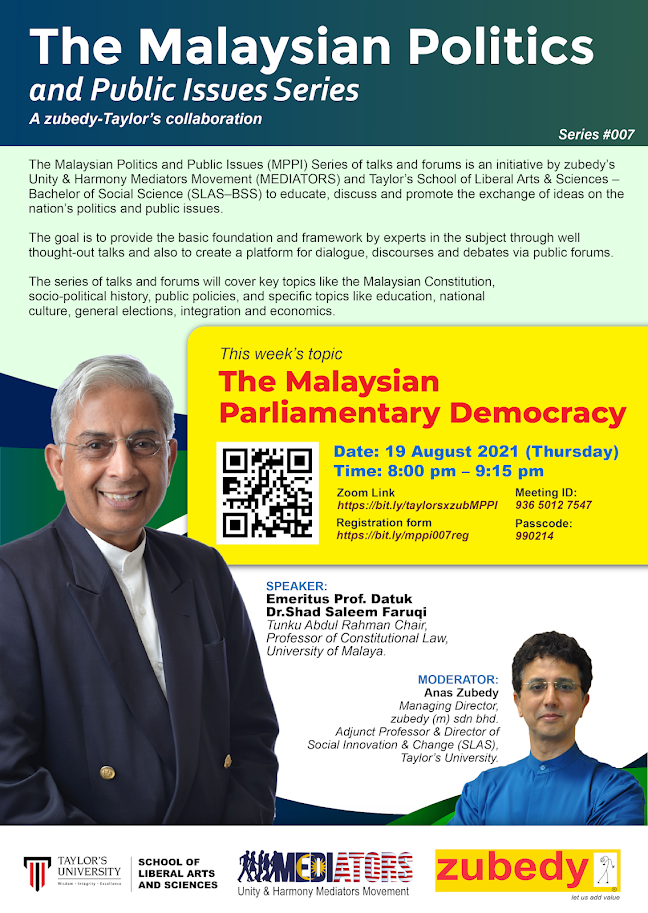