“What gets measured gets improved”
-       Peter Drucker

Re: Let’s agree on what is and what is not performance.

Let us be candid. 2016 will be a really challenging year. We have to step up our act. There are many things to do. First, we need to identify the one action that when done right, will give a major impact.

I suggest we focus on PERFORMANCE.

1.     Many Malaysians have a twisted idea about performance. The majority who perform at a mediocre level perceive themselves as excellent performers. They rate themselves as Excellent Performers (A/5) when they clock in at 9 and go back at 5. This is performing as expected. In reality however, most would at best be performing at a C minus level.

2.     We are a nation who lies to each other. Superiors evade managing tensions and stay away from unpleasant conversations. They avoid taking tough actions to manage performance and subordinates’ weaknesses are not communicated and corrected. Many sugar coat poor performances simply because they want to be seen as nice bosses.

3.      We give bonuses to almost everyone each year, making everybody believe that they walked the extra mile for performance. To be nice, we distort reality. We created a workforce that simply does not know how to self-analyze. A workforce where the idea of self and reality is as far apart as Kangar is to Kota Kinabalu. This distortion is even more serious within the younger workforce, namely the Generation Y.

As leaders, our duty is to fix this. We must establish yardsticks and communicate them to our people. Clarity of goals and its measurements are crucial factors that determine the performance of the organization and every worker in it.

We at Zubedy have drawn a simple and easy to understand description of what is and what is not performance. We would like to share it with you as we have done to many of our clients.

Let’s make Malaysia great. Let’s start the conversation about performance, making it a daily topic. Until we re-calibrate on what is and what is not performance, we will not be able to do things right. 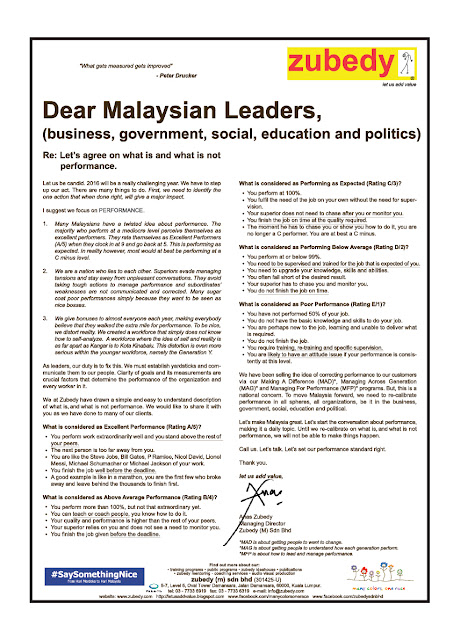 Posted by anas zubedy at Saturday, January 16, 2016 No comments:

Once again, a member of one ethnic community has used an ethnic slur against a member of another ethnic community. What is perhaps different this time is the widespread condemnation of the man who uttered the slur from within his own community and the praises showered upon his target especially in the new media. This could be because his target, a medical doctor, was actually trying to help the man injured in a road accident when he resorted to that derogatory epithet. In spite of his insult to her ethnicity, she remained by his side until medical assistance arrived. It is her deep sense of duty and her magnanimity that impressed a lot of people.

But Malaysians have to go beyond condemnation and praise. It is so important to understand why ethnic slurs, negative ethnic stereotypes and ethnic misconceptions are so pervasive in our society. It is true of course that there is perhaps no community on earth where negative perceptions of ‘the other’ do not exist. In some places they have hardened into deep-seated prejudices transmitted from generation to generation.

Ethnic slurs evolve from different historical and sociological circumstances. The term directed against the good doctor was not always derogatory. Centuries ago, it was used as a descriptive term to denote people who had come to Southeast Asia from a certain region in India, or sometimes, from South India as a whole. This explains why the term is employed widely as a place-name in various parts of the Malay Peninsula and Singapore.

Its connotation changed when under British colonial rule a huge influx of Indians from South India began working as rubber-tappers in plantations and as laborers building roads, railways and colonial offices. It was their low socio-economic status, characterized by exploitation and marginalization, which shaped public perceptions of the community. A neutral term used in the past to describe the Indian community became pejorative from the 19th century onwards. Socio-economic and socio-political factors sometimes impact upon the meanings attached to words.

Likewise, one’s limited experience with individuals or families from another community may be responsible for the growth of negative stereotypes. Based upon such experience, one concludes erroneously that community X is greedy or community Y is niggardly or community Z is lazy. One may not realize that there may be a lot of people within the stereotyped community who are just the opposite of what the community is supposed to be. This is why simplistic generalization of the character of a community or a people is not only wrong but also unfair and unjust. Negative ethnic generalization is the bane of inter-ethnic harmony in a multi-ethnic society.

Negative stereotypes are closely linked to yet another formidable barrier to inter-ethnic harmony. When ethnic misconceptions abound, building bridges among communities becomes a major challenge. A common misconception is that since the Constitution provides for the ‘Special Position of the Malays’ all political power is concentrated in the hands of the Malays. A cursory review of the composition of Parliament, the State Assemblies, Federal and State Cabinets and of all those forces that influence the actual exercise of political power in a society like ours from big business to the media, will reveal that the truth is something else. Similarly, just because the vast majority of the billionaires in Malaysia are Chinese, it is wrong to assume that the community monopolizes the nation’s wealth. An analysis of the ownership of big banks, of public and private sector corporations and of land and other natural resources will show that the wealth profile of the nation is more complex than that. Though political and economic realities tell a different story, gross misconceptions about Malay power and Chinese wealth have had a tremendous impact upon the nation’s political discourse. Consequently, they have contributed to the deterioration of ethnic relations.

How do we stem this deterioration? How do we ensure that ethnic misconceptions, ethnic stereotypes and ethnic slurs do not continue to hamper and hinder the quest for national unity? Apart from elites demonstrating through deeds that the dignity of everyone who resides in this land is priority and that justice for the weak and vulnerable takes precedence over their own power and wealth, all sectors of society should focus upon two goals. One, there should be a systematic, organized effort to raise awareness about the pitfalls of ethnic misconceptions, stereotypes and slurs. Research findings from some of our universities on these issues should be widely disseminated through the media. Our principal target should be the Malaysian family since a lot of ethnic misperceptions are spawned within the family setting. If within five years of vigorous education of the family, a significant portion of Malaysians develops a more rational, balanced, empirically based understanding of ethnic realities, we would have moved a few steps forward in our journey towards unity. Two, this journey would become more meaningful if there is also a parallel attempt to create opportunities for greater interaction among the various communities. It is when people continue to live in their own ethnic silos that misconceptions about the other gain more adherents. Exposure to one another in a positive environment is one of the most effective ways of combating ethnic stereotypes.

Dr. Chandra Muzaffar is Chairman of the Board of Trustees of Yayasan 1Malaysia.