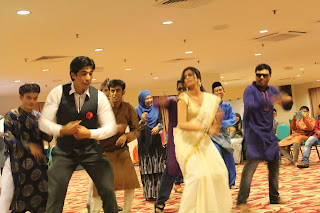 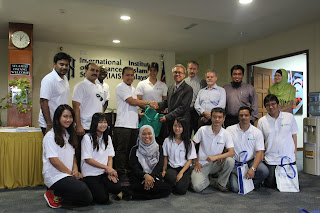 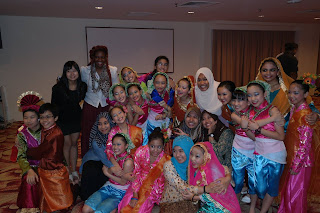 The International Movement for a Just World (JUST) is pleased to announce that we are opening registration for the Inter-Civilizational Youth Leadership Program (IYLP) 2015.

The Program seeks to “develop a deeper understanding of global challenges and how youths can contribute toward the creation of a just world”. This year, our goal is to also provide a strong conceptual foundation for these potential young leaders of the future.

During this leadership course, the delegates will go through among others Zubedy’s signature program, Making A Difference (MAD). The program is similar to those that we provide to multinationals and local companies. Please refer to the attachment for the complete itinerary.

Here are some of the information for the program:

What?
The International Movement for a Just World (JUST) is organizing an annual Inter-Civilizational Youth Leadership Program (IYLP) 2015.  In the program, participants will undergo an extensive course to develop practical leadership qualities that are required to address many of the challenges in leading others, leading change and self-leaderships.
Each year, about 50 delegates will go through this program.  It is a tradition to ensure that 50%  of the delegates are locals and the remaining 50% are international participants.

Who?
This yearly program attracts to bring together 50 to 60 youths from different nationalities, religions and cultural backgrounds aged from 21 to 30 years old.

How?
Please find the IYLP Participant Application form with this letter.  We would be grateful if the forms filled could be returned to hassanal@just-international.org by 25th  October 2015

Reflecting On The Law by Prof. Shad Saleem Faruqi - The STAR

Not a mere ceremonial body

THE 239th meeting of the Conference of Rulers on Oct 2-3 issued a strongly worded statement about the need to bolster transparency, credibility and integrity in government.

It also expressed strong support for our tradition of inter-racial and inter-religious harmony, and expressed dismay that some political leaders and non-governmental organisations are sensationalising racial and religious issues to garner support for their party or themselves.
The Rulers’ intervention on issues of governance may raise some eyebrows about the proper relationship between constitutional rulers and the elected government of the day.
Previous precedents: It is humbly submitted that the Rulers were well within their constitutional role under Article 38 of the Federal Constitution to issue their call for good governance and racial and religious harmony. There are previous precedents for such royal statements, for example on Oct 14, 2010 when the Rulers expressed concern about political trends that undermine the supremacy of the Constitution.
Article 38: Clauses (a) to (e) of Article 38(2) confer on the Conference of Rulers a number of specific duties and functions like the election of the Yang di-Pertuan Agong and his Timbalan, matters of religion, consent to some types of legislation, advising on some key constitutional appointments, nomination of members of the Special Court and granting pardons.
What is significant is that Article 38(2) ends with the words that the Conference “may deliberate on questions of national policy (for example changes in immigration policy) and any other matter that it thinks fit”.
These words clearly envisage that the Conference is not a mere ceremonial body. It is also a constitutional auditor; a part of our check-and-balance mechanism.
The Conference’s discretion to deliberate on policy issues extends to the whole panorama of events. It is not hampered by the Federal-state division of powers.
It can scrutinise any issue, ask any questions, seek any information. It can advise on any matter. It can seek to build bridges between communities, heal wounds, unify our divided and disparate communities.
Limitations: However, it must be noted that the Article 38(2) function is deliberative, not decisional. In the exercise of this discretion the Yang di-Pertuan Agong and the Rulers are accompanied by the Prime Minister and the Chief Ministers and are bound by any advice tendered. Further, the views of the Conference are not binding on the Federal Government.
Nevertheless, the very fact that the Constitution explicitly authorises the Conference to deliberate on national policy points to the potential for influencing the nation’s goals and the means to achieve them.
One must remember that even in Britain the constitutional monarch is not prevented from “advising, cautioning and warning”.
Because of the prestige of their offices and the long years on the throne, the Sultans can bring to bear on the deliberations of the Conference a large fund of expertise in public affairs. There is a large potential for statesmanship.
Another unmet need: The unifying, dignifying and stabilising influence of the Conference can also be utilised in another area where things have lost the balance that was contemplated by the 1957 and 1963 Constitutions. And this is the question of overzealousness by religious authorities.
Since the mid-eighties, an extra-legal interpretation has been given to State powers to enact “Islamic legislation”.
The constitutional division of powers between the federation and the states is often ignored. For example some states are operating rehabilitation centres for Muslims. Under the Constitution all prisons, rehab centres and reformatories are in federal hands.
State legislatures are passing hudud laws, legislating about homosexuality, betting, lotteries and HIV testing even though these are within federal jurisdiction.
The fundamental rights of Muslims are often trampled upon. For example, Selangor and Negri Sembilan laws confer power on Ta’uliah Committees to forbid Muslims from conducting a religious talk if they are not issued a letter of authority.
In Fathul Bari Mat Jahya (2012), a Negri Sembilan law was challenged on constitutional grounds but the court looked the other way. Such a prior restraint on free speech and such a repressive, monopolistic view of Islam has no support in the syariah.
Fatwas are being issued against liberalism without defining a term that occurs in our Rukun Negara. Religious pluralism is condemned even though the Holy Quran in Surah Al-Kafirun says “to you your religion, to me mine”.
Instead of uniting the Muslim community, periodic tirades are conducted against an ever-increasing number of Muslim groups.
Whether such hate-mongering contributes to the milieu in which some misguided Muslims join the murderous mercenaries in Syria and Iraq, is open to debate.
Islam is a beautiful mansion with many rooms. Differences and diversity are part of Islam. But lately in this country, a very narrow, pedantic, obscurantist view and vision of Islam has taken hold.
The gates of ijtihad (independent reasoning) are closed. Taqleed (unquestioning conformity) is mandated.
Any rational discourse is suppressed on the pretext that Muslims may get confused. We perhaps stand alone in giving to religious fatwas by unelected officials the full status of law.
Muslims from other lands express surprise that questioning a fatwa is regarded as a criminal offence!
The syariah authorities often exercise powers over non-Muslims they have no right to exercise e.g. raiding Christian churches or Hindu temples, seizing copies of the Holy Bible legally imported into the country, dissolving non-Muslim marriages, converting non-Muslim infants without the knowledge or consent of both parents.
There are instances of body-snatching and exhumation to ensure that the deceased is given a Muslim burial.
In the seizure of Bibles in Selangor and the raid on the Borders bookstore, syariah authorities defied the advice of the Attorney-General, the state government, the High Court and the Court of Appeal.
The over-assertiveness on religious issues in Peninsular Malaysia is causing unease in Sabah and Sarawak.
Given the country’s commitment to pluralism and tolerance, we need an eminent institution whose unique position qualifies it to play the role of a conciliator.
With the political executive, the judiciary and parliament unwilling to rise to the task, the Conference of Rulers is the only institution that can restore balance, counsel moderation and rein in the extremists.
Shad Faruqi is Emeritus Professor of Law at UiTM. The views expressed are entirely the writer’s own.

this article was taken from the STAR
Posted by anas zubedy at Friday, October 16, 2015 No comments:

Let us be candid, we have a serious concern. According to the Department of Statistics Malaysia, there are over 200,000 Malaysian graduates who are unemployable. The truth is, there are many jobs in the market, especially in sales. Unfortunately, the majority of these 200,000 Malaysian graduates do not have the background sales culture, personality nor the skills for sales related positions. Sales, however, is a skill that can be taught. Since 1997, Zubedy has trained many organizations and its people on selling skills that it has since become one of our forte.

When Khazanah proposed that we look into the Khazanah Nasional SL1M – Green Program, we urged for a more specialized approach. We tapped into our expertise and offered to develop the graduates specifically in the field of selling.

We aptly call this program ‘Entrepreneurship through Effective Selling Skills’ with the hope that it will provide the target participants with survival skills and at the same time trigger the entrepreneurial spirit among the young through the power of sales, which is key in business. We also hope that the skew towards entrepreneurship will attract more toward sales based program as many try to avoid a career in sales.

WHAT IS KHAZANAH NASIONAL SL1M – GREEN PROGRAM?
This program is funded primarily by Khazanah. It is aimed to facilitate graduates to have the opportunity to be developed and be employable so that they can contribute positively to their growth and the growth of the nation. Zubedy’s job is to develop and prepare the graduates with the A to Z of selling. From prospecting to building long term relationships with customers. This would include the pre-approach, sales planning, how to deal with sales contact, assessing customer’s needs, effective sales presentation and how to close effectively. In this program, we will also share with them life skills, communicative English, how to handle sales interviews and effective sales presentation that is crucial for a holistic character of an effective sales person. 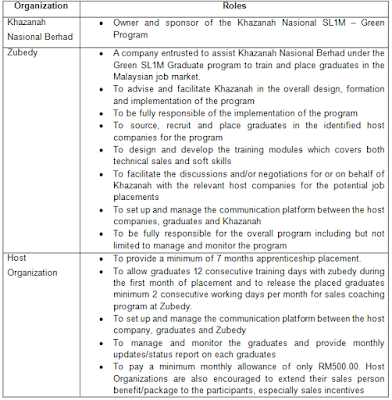 HOW THE PROGRAM IS RUN?
Under this program, Zubedy shall:


The table below reflects the overall module of the training program: 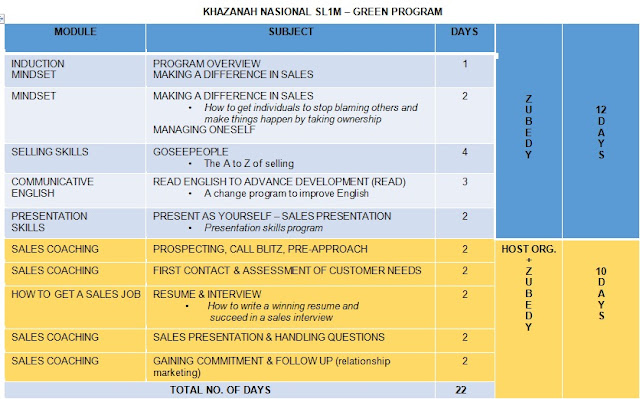 WHEN WILL THE PROGRAM START?
The placement of graduates in Host Organizations will commence on 16th November 2015.

WHY SELLING SKILLS?
Selling skills have become more important and more relevant today than ever before. It is one of the essential survival skills in the current competitive work environment. If one wants to boost their careers and make themselves relevant, they must find a way to work in sales. Whether they work for someone else, own their own business, or even work in a role where they never interact with customers, sales skills are incredibly useful. Zubedy believes that when graduates are equipped with selling skills, they automatically increase their employability. Sales will help them develop self-discipline, self-confidence, communication skills, determination and perseverance. Selling is a skill that is relevant in all areas of business field.

Your organization is the perfect platform for graduates to gain experience and enhance their selling skills. By taking on the participants of the Khazanah Nasional SL1M - Green Program, your organization will benefit by:
1.    An opportunity to unearth talent at a minimum cost and risk

2.    Contribute to the growth and development of the nation by increasing the employability of young Malaysian graduates

Posted by anas zubedy at Thursday, October 15, 2015 No comments:

PEMANDU is seeking the views of Malaysians on the importance of being proficient in English. Please support this study by completing a short survey. The survey takes no more than a minute to complete. The survey is anonymous. No personal data will be captured. We also seek your support in increasing our outreach. Please forward the survey link to others who may be interested to participate.

To answer the survey, please click here
Posted by anas zubedy at Tuesday, October 06, 2015 No comments: