Have A Meaningful Chinese New Year - Monday in The Star 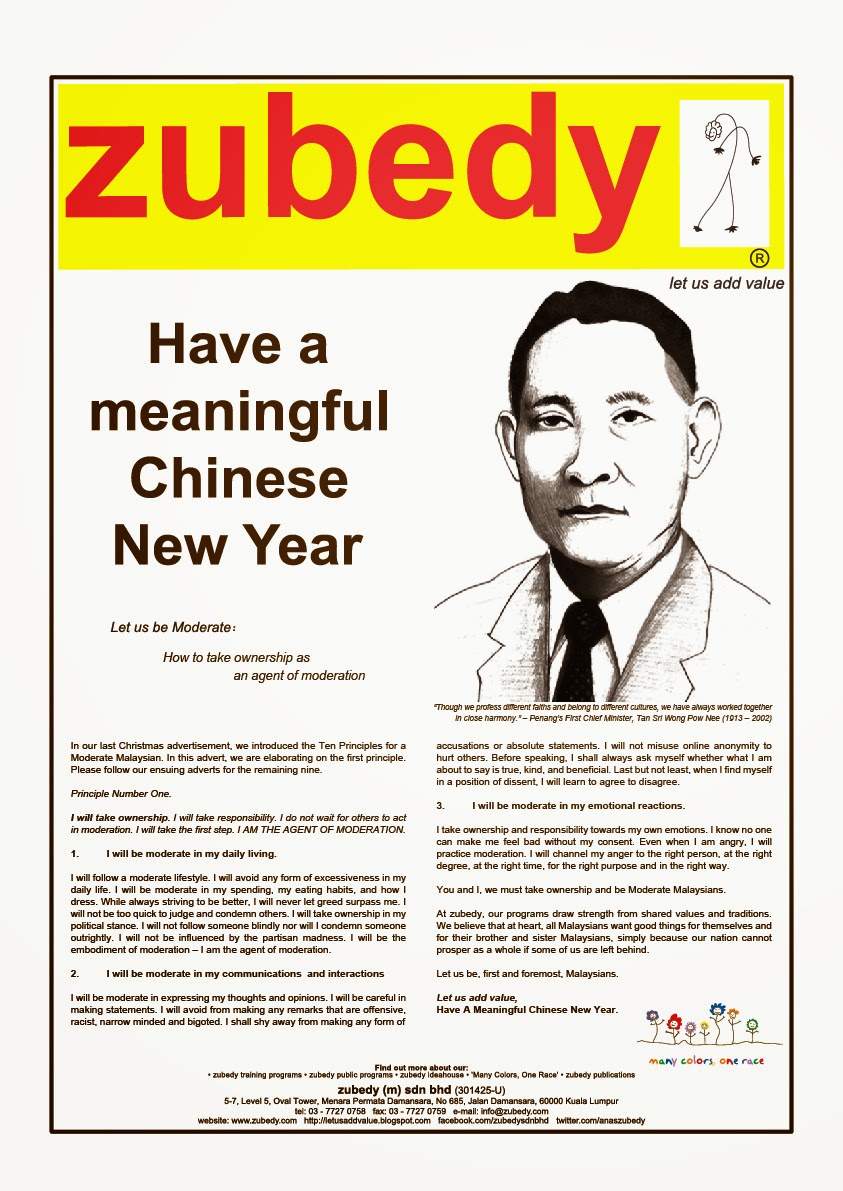 The best way to ‘Dress’ – a Quranic point of view

Muslims in Malaysia today more than ever are very conscious and sensitive about how we dress.

On one side our religious leaders are making sure we pay attention to how we cover our ‘aurat’ and more recently, Dr Asri, Mufti of Perlis took importance on ‘how we should dress’ when we visit religious activities of non-Muslims.

While the focus and attention to the ‘externals’ may have its merit and significance, the Quran emphasize on the ‘internals’ - who we are as a total person, our character, our contribution, our deed.

Let us let the Quran speak for itself,

“O CHILDREN of Adam! Indeed, We have bestowed upon you from on high [the knowledge of making] garments to cover your nakedness, and as a thing of beauty: but the garment of God-consciousness is the best of all. Herein lies a message from God, so that man might take it to heart.”   Quran 7:26

While there are numerous verses all over the Quran talking about true piety and God-consciousness (TAQWA), the verse 2:177 somewhat summarizes what is expected of a God-conscious person neatly.

Personally, I see this verse as the Quran’s 10 Commandments towards TAQWA and I remember/recite it during my prayer, daily.

“True piety does not consist in turning your faces towards the east or the west - but truly pious is he:

it is they that have proved themselves true, and it is they, they who are conscious of God”

I wish our religious leaders will pay more attention to ‘what is inside’ a person, too. Peace.

Posted by anas zubedy at Saturday, February 07, 2015 No comments:

How to plan your future on RM2,000 basic salary - The Rakyat Post

LAST week, a friend who read my earlier piece on the importance of inculcating the savings habit called me over to his house.
His son had started working six months ago and he thought I could give the young chap some advice.
“He doesn’t listen to us when it comes to managing money,” my friend said with a laugh. “Maybe you can give him some tips.”
I said if the boy, the youngest of his three children, didn’t listen to him or his wife, my chances of convincing the young man would be even slimmer. But realising that he was serious, I went over that evening.
The young lad started working as a sales executive six months ago and was earning what the lad described as a meagre basic pay of RM1,980.
His gross income, which included commissions, amounted to slightly over RM3,000.
Despite the pay, which I considered to be quite good, he said that on some months, he found himself broke as early as a week before payday.

Curious, I asked him if he planned his spending. When he said he did not, I asked if he could give me a rough breakdown of his expenditure and he came up with an estimate of this:
food – 25% of take-home pay;
petrol and car instalment and related expenses – 40%;
entertainment –15%;
contribution to family – 15%, and,
remainder 5% for other incidentals.
- How to save -
I told him he was lucky as he did not have to pay for board and lodging since he was staying with his parents. On top of that, he also ate his dinner at home and during weekends.
His annual income had also put him out of the taxable bracket. While I agreed with him that it was not easy to save even with his income, especially if one is living in Kuala Lumpur city, I said I had known of some of those his age who were earning a third less than he did and got by quite comfortably.
I said that if he could trim 5% off his entertainment expenses and add it to his 5% of what he had allocated for incidentals, he could actually save 10% of his take home pay each month.
I noted that he had also yet to purchase a life or health insurance, so I advised him to look into it if he could fit it into his budget.
He asked me what good it would do to save 10% of his meagre pay when in years to come purchasing power of the savings would have dropped as cost of living escalated.
I said if he didn’t start saving, he would have nothing by that time, despite rising costs of living.
But with a healthy cash reserve, I said he could do plenty. What was more important was to inculcate a savings habit.
If he had cash reserves, he could also put it in a fixed deposit account to earn interest or have it invested in a higher-return investment like trust funds.
If he wanted to buy a property one day, I said he could also put a higher downpayment and borrow less from the bank.
Indeed, saving 10% of one’s income was not much. But I told him that sum accumulated over three years would total an amount equivalent to three times his current pay, and should he for any reason lose his job, he would be able to sustain himself until he got a job again.
To help him understand better, I did a chart of his projected savings in 10 years, based on a regular monthly deposit of 10% of his pay. (You can see how much RM300 diligently deposited monthly over 10 years with a 3.5% compound interest will add up to in the chart given.)
I told my friend’s son that he was only 23 years old. By the time he was 33, he would have a healthy growing cash reserve of RM43,709 which he could use for other more profitable expenses like starting s family, putting a deposit on a house or even for education to improve his paper qualifications if he chose to.
And if he did not touch the savings, in another 15 years when he was 48, he would have a total of RM140,928, as shown in my calculation using with an online tool at http://www.investor.gov/tools/calculators/compound-interest-calculator#.VMG1uf7Lez5

As you can see, the final amount was derived at with the assumption that there was no increase in the value of deposits or a rise in interest rate (from 3.5%).
In a real-life scenario, chances are that his pay will rise with time and the regular 10% deposit will also be increased accordingly.
If he strictly kept to the discipline of savings, his cash reserves would be a very healthy one by the time he reached retirement age because his own savings, plus the mandatory contribution to the Employees Provident Fund, would have grown by leaps and bounds.
I suggested to the chap that he make a simple financial forecast chart like the one I did and review it each time he got a pay rise.
I told him to also make copies of his chart and place them at places where he would see them throughout the day.
The charts with his financial goal would ensure that he stayed on track as he strove towards financial freedom.
Article was taken from TheRakyatpost.om
Posted by anas zubedy at Tuesday, February 03, 2015 No comments: