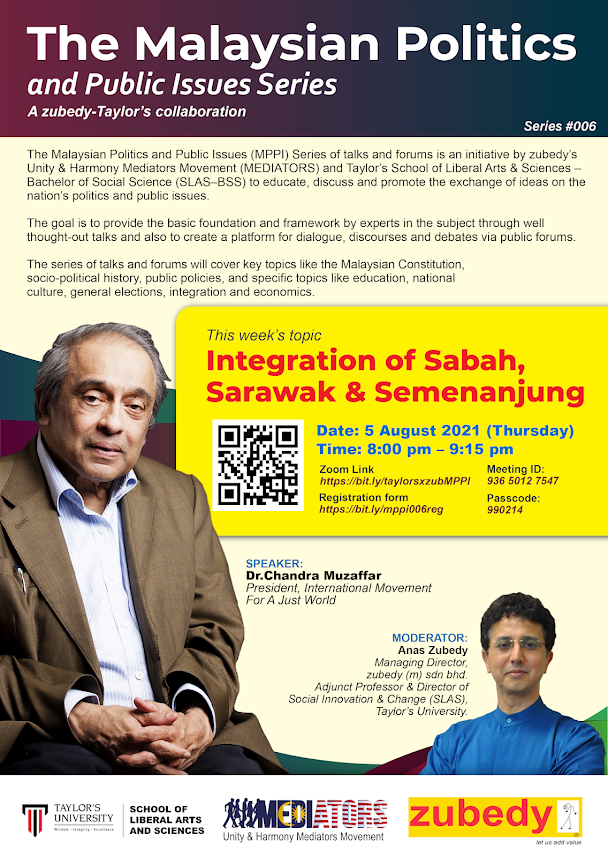 That was why as early as February 2020, I have suggested a MAGERAN-styled govt or a UNITY Government as I feared the instability we might face without a coalition that has a solid majority. Sadly, my fears were right. Like before and until today, I do not have the confidence that our politicians can stop themselves from the crab culture. “Politik Ketam” is an ingrained habit within their inner selves. Furthermore, supporters are cheering the politicians on, making them confident that they are doing the right thing and moving on the right track.

I do not foresee any change in their mentality in the near future. But we must have stability to save the nation from going deeper into crisis. The crux of the issue rests on legitimacy. We need leadership that is beyond a shadow of doubt of legitimacy to lead the country to remove uncertainties.  As such, I would like to suggest the following.

1. I humbly suggest Perikatan Nasional to show their numbers as soon as possible to provide stability in Parliament and as such the country. Even if their majority is very slim. Please do so. This will legitimize their position and help the nation move forward.

2. Failing which, I humbly suggest Pakatan Harapan to show that they have the numbers instead of asking Perikatan Nasional to prove theirs. Get your majority to stand together at Parliament grounds instead of waiting impatiently for a vote inside the House. It is like a protest vote that your team has often exercised before. In this way, you can show you are the legitimate government, with the number of seats and convince His Highness YDP Agung. He could then choose your leader with much ease.

3. If both sides avoid the above and we continue with this uncertainty, I humbly suggest His Highness YDP Agung to use whatever powers he and his Brother Rulers have as written in the constitution as well as their influence and goodwill to move towards creating a MAGERAN-like organization with key statesmen/women with the skills and knowhow needed to lead the nation for an agreed period of time. Any politician who is included in the core organization must retire from politics thereafter. And any other members are also disallowed from joining active politics.

I sincerely hope we find a quick solution from the current political uncertainties. We need to be very focused in dealing with the Covid 19 situation and the economy. The rest are secondary.

Let us remove uncertainties, create political stability and have the clarity of goals that we need while at the same time set constant measurements until we succeed.

HAVE A MEANINGFUL HARI RAYA QURBAN. - The word Qurban is derived from the triliteral root qāf rā bā -

HAVE A MEANINGFUL HARI RAYA QURBAN. 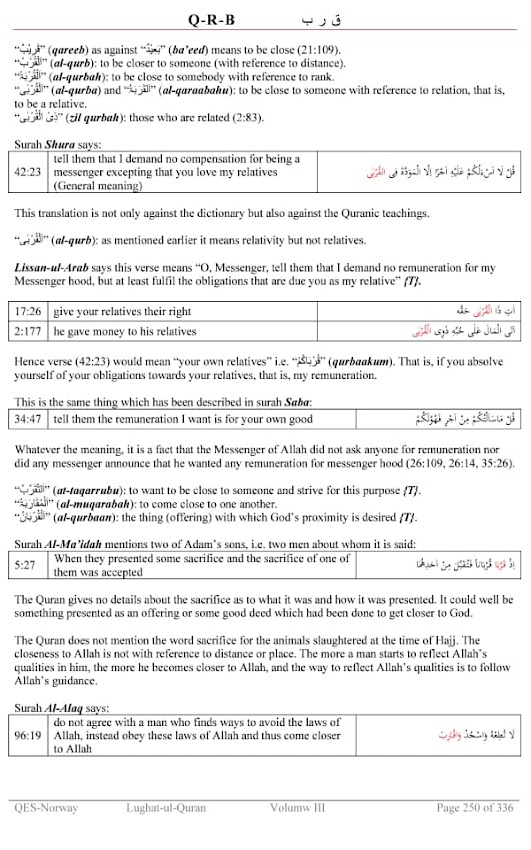 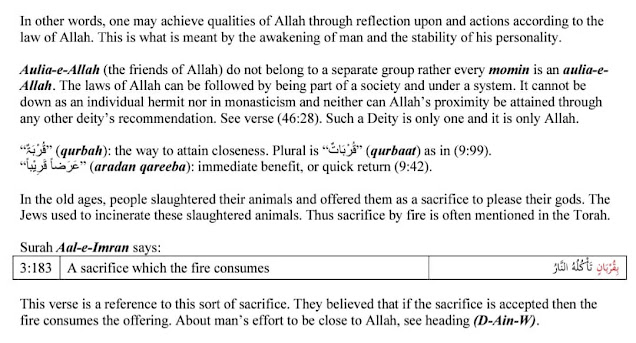 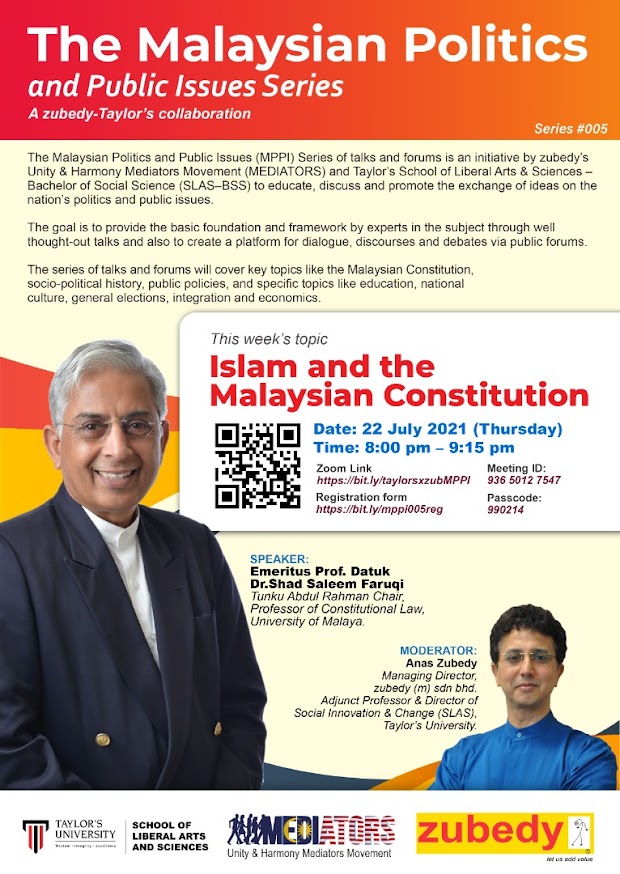 JOIN US THIS COMING THURSDAY

The Malaysian Politics and Public Issues (MPPI) Series of talks and forums is an initiative by zubedy’s Unity & Harmony Mediators Movement (MEDIATORS) and Taylor’s School of Liberal Arts & Sciences – Bachelor of Social Science (SLAS–BSS) to educate, discuss and promote the exchange of ideas on the nation’s politics and public issues.

The goal is to provide the basic foundation and framework by experts in the subject through well thought-out talks and also to create a platform for dialogue, discourses and debates via public forums.

The series of talks and forums will cover key topics like the Malaysian Constitution, socio-political history, public policies, and specific topics like education, national culture, general elections, integration and economics.

ISLAM AND THE MALAYSIAN CONSTITUTION

DEAR POLITICIANS - "Do not offer your leadership. We do not trust you. Offer to work with each other"

"Do not offer your leadership. We do not trust you. Offer to work with each other"
Understandably, the rakyat is getting impatient. Confused. Uncertain. Afraid. Angry.
Being cooped up at home with lesser money and yearning for social interactions both with family and friends. Everyone knows someone who lost someone and many directly losing a close one. The heart is in pain.
If the leaders still do not get it and do something significant, cut politicking to zero (nobody talks about power keeping or grabbing), remove uncertainties and create loads of “safety valves”, the anger may pour over into something worst.
Do not offer your leadership. None of you could win the majority's heart. None of you have the capacity to win the rakyat's trust on your own.
Let me repeat. Do not offer your leadership to solve the country's challenges - we will interpret it as you are using the rakyat's pain to gain power - for your own selfish agenda.
OFFER COORPERATION TO EACH OTHER. That is the only way you can win the majority's trust. The country and even your own political groupings are too divided to go in alone.
OFFER TO WORK WITH EACH OTHER.
DO NOT OFFER YOUR LEADERSHIP.
OFFER YOUR SERVANTSHIP.
So do think hard. Go deeper into your hearts. Be wiser and better than you have ever been.
Thanks. Peace, anas.
Posted by anas zubedy at Monday, July 12, 2021 No comments: 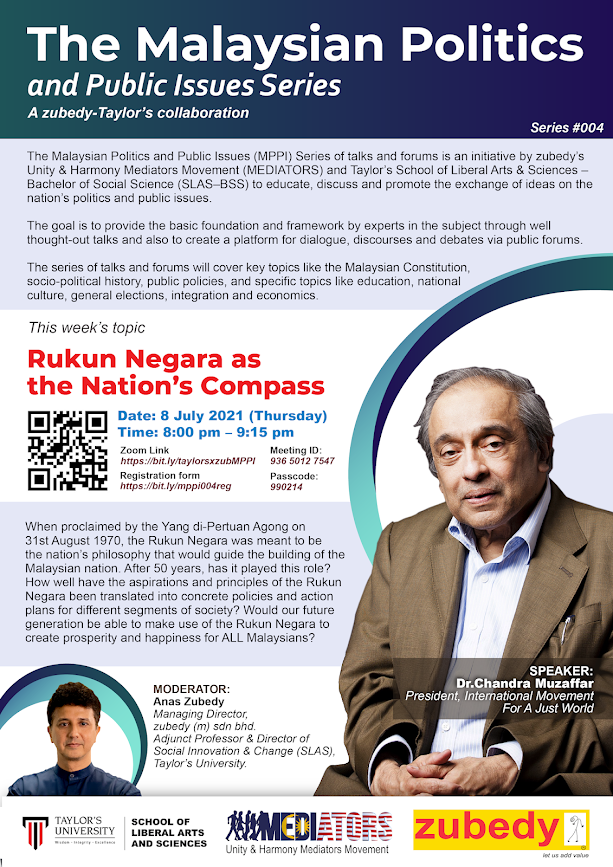 Rukun Negara as the Nation’s Compass

“When proclaimed by the Yang di-Pertuan Agong on 31st August 1970, the Rukun Negara was meant to be the nation’s philosophy that would guide the building of the Malaysian nation. After 50 years, has it played this role? How well have the aspirations and principles of the Rukun Negara been translated into concrete policies and action plans for different segments of society? Would our future generation be able to make use of the Rukun Negara to create prosperity and happiness for ALL Malaysians?”