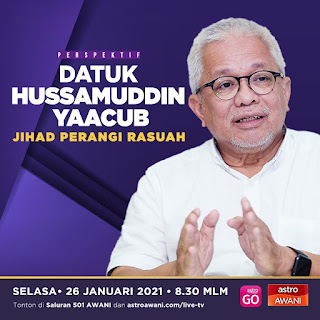 Let us all give our support to the leadership of Hussamuddin Yaacub in fighting corruption in Malaysia.

I personally know him. He is genuine.

We must back him so that we can provide the mass support a leader must have to impact change.

Why is it that in spite of increasing Covid 19 infections, rising fatalities, massive floods in a number of states and serious economic challenges, some politicians are still indulging in political machinations and manipulations? His Majesty the Yang Di Pertuan Agong and a number of Rulers have strongly advised politicians against indulging in political manoeuvres at a time like this. Together with the rakyat, they have pleaded with the politicians to refrain from politicking and concentrate instead upon taming the pandemic and overcoming our economic woes.

Their plea has fallen upon deaf ears. Are some politicians determined to pursue their agenda of replacing the Muhyuddin Yassin government because they are convinced that it is “illegitimate”? The current government was installed in March 2020 in accordance with constitutional procedures and practices in the wake of the resignation of then Prime Minister Tun Mahathir Mohamad. This has happened before at the state level, in Trengganu in 1961, Sabah 1994 and Perak 2009. In fact the Barisan Nasional itself emerged in the early seventies as a result of defections and cross-overs and became the new inter-party coalition in power.

Perhaps we should have a law at federal and state levels against defections in the legislatures which some of us have advocated since the early eighties. It should be based upon the principle that an elected legislator who is no longer capable of representing his constituents should return his mandate to the voters. Unfortunately, many of those who are pushing for the ouster of the present Prime Minister are not keen on the introduction of such legislation. They want to continue to encourage defections if it serves their narrow interests. Are those seeking the Prime Minister’s removal doing so because they are convinced that he is incompetent?

After almost a year of the Coronavirus crisis, it is obvious to most observers that Malaysia has performed relatively well under his leadership, compared to many other countries. The political leadership reinforced by a core in the civil service and the national health services have displayed a deep sense of responsibility in executing their tasks in a calm and organised manner. The delivery of economic assistance to the vulnerable and their carefully planned approach to the imminent distribution of vaccines to the people bear testimony to this.

The real reason why there are attempts to oust the Prime Minister is linked to the thinly veiled interests of a handful of politicians. There are individuals in parliament part of the largest component party in the ruling coalition, allegedly involved in corruption whose court trials may result in their incarceration ---- incarcerations which they hope some other leader at the helm of the nation would be able to help them avert.

And there are leaders who for decades have sought the Prime Ministership who may be prepared to play footsie with those individuals trying to stay out of jail. Apart from this unholy alliance, there is also another veteran Member of Parliament who feels that it is his ‘royal right’ to be Prime Minister. He is joined by another veteran who was Prime Minister for a total of 24 years and remains convinced that no else can do the job and for that reason wants to return to power! This coterie of leaders driven by differing motives are united in their common goal of easing out the incumbent through multiple manoeuvres though they have yet to reach consensus on who should replace Muhyuddin.

Given the numbers game in elite politics, the weakness of institutions that can check unscrupulous political behaviour, and the absence of a strong commitment within the populace to principles in politics, those who are seeking the Prime Minister’s ouster may even succeed. For those of us who are not prepared to put aside ethical concerns in politics and public life and realise the importance of a national leadership that is completely devoted to overcoming the pandemic and ensuring an effective economic recovery over the next two years, the politics of ousters should stop immediately.

It is In this regard that the following three point proposal is being presented. One, this is the time for the Conference of Rulers as a crucial instrument of governance to play its rightful role. The Conference which has been described as the fourth arm of governance in our system --- the other three being the Legislature, the Executive and the Judiciary --- should not only implore all political actors to desist from politicking but also warn them that they cannot create political uncertainty and foment discord and friction without facing the full force of the law. They should understand that the nation is in crisis and those who are hell-bent on pursuing their own nefarious, self-serving agendas will be made to pay the price.

Two, the Conference of Rulers should also advise the Executive to establish mechanisms at the Federal and State levels which will enable the Opposition also to contribute to, and participate in, the decision-making process vis-à-vis our twin health and economic crises. The Opposition’s role should not be a mere tokenism. An active role for opposition parties will go a long way towards diluting the adversarial atmosphere that prevails at the moment.

Three, though the government – opposition mechanism proposed here will concentrate upon our twin crises, it could also be utilised to formulate measures directed towards improving governance as a whole. The idea of a genuinely independent Ombudsman first articulated in the seventies would be something worth pursuing. We are at a critical juncture. If our leaders remain obsessed with the politics of power and position, we would be hastening our own destruction. We are reaching the brink. Let us pull back--- before it is too late.

Dr Chandra Muzaffar has been writing on Malaysian politics since the early seventies. Kuala Lumpur. 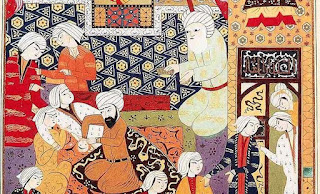 While Europe was still in the dark ages, the Muslim world has the most advanced hospitals in the world. Muslim doctors, male and female, have to pass exams. Nurses too! They were so advanced and far knowledgeable that wounded crusaders would choose to go to Muslim doctors instead of their own Christian ones.
Ibn Sina’s medical encyclopedia the “Canon of Medicine “collected the medical knowledge of ancient Greek, Persia, China, India and the Islamic world. It remains and was used as the standard medical textbook for European doctors until the seventeenth century.
Abu Al Qasim Al Zahrawi (Abulcasis) pioneered modern surgery and he is considered the father of operative surgery because he made important advances in surgical procedures. Setting rules about anesthesia, antiseptics and guidelines about hygiene. His famous book Al Tasreef summarizes fifty years of medical education, training, practice and experience. Thirty volumes of medical encyclopedia! Besides sections on medicine and surgery, his encyclopedia also covers vast disciplines like pharmacology, dietetics, therapeutics, psychotherapy, weighs and measures, medical chemistry and others. Three chapters were devoted on surgery and the last chapter was dedicated on surgical instruments. His work was widely translated and used across Europe until modern times.
Ibn al-Nafis the greatest physiologist of the middle agehas been described as "the father of circulatory physiology" and the second Ibnu Sina. He wrote more than 110 volumes of medical textbooks. He challenged Galen’s work on physiology and anatomy. His writings on the circulation of blood round the body (pulmonary circulation) preceded William Harvey the English physician by 300 years.
Ibn Sina, Al Zahrawi and Ibn al-Nafis are just a few of the numerous polymaths in the Muslim Golden Era. They not only were great physicians but also set the framework and practice of medicines for humanity. They defined the S.O.P.
Today, I see my Muslim brothers and sisters are all excited about a Muslim doctor innovating a disposable hijab – when "scrubs" or "theatre blue" are already mostly disposable. How sad.
I wonder what are the hijab procedures at hospitals during the Muslim golden era be like? Perhaps this picture of physicians, nurses and patients from the era would help us ponder.
“We have not sent down the Quran upon you to cause you distress” - Quran 20:2
Peace.
Anas Zubedy
03/01/21
Note:
Picture source: Amira Ayad, Khaleafa. Nov 14, 2015. History of medicine in the Islamic civilization.
Posted by anas zubedy at Sunday, January 03, 2021 No comments: