Have a meaningful Vaisakhi 2022 - ENGLISH IS NOT IN COMPETITION WITH BAHASA MALAYSIA. THEY COMPLEMENT EACH OTHER. 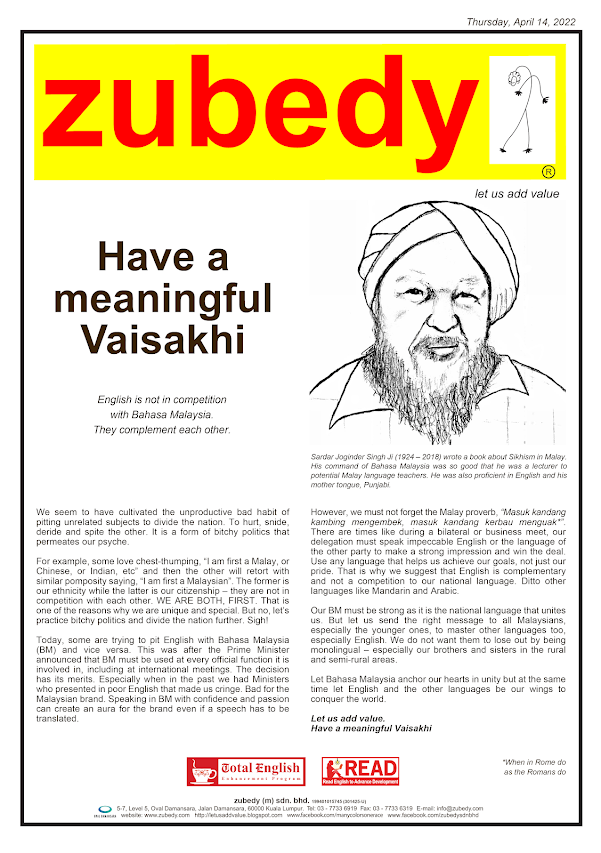 ENGLISH IS NOT IN COMPETITION WITH BAHASA MALAYSIA. THEY COMPLEMENT EACH OTHER.
We seem to have cultivated the unproductive bad habit of pitting unrelated subjects to divide the nation. To hurt, snide, deride and spite the other. It is a form of bitchy politics that permeates our psyche.
For example, some love chest-thumping, “I am first a Malay, or Chinese, or Indian, etc” and then the other will retort with similar pomposity saying, “I am first a Malaysian”. The former is our ethnicity while the latter is our citizenship – they are not in competition with each other. WE ARE BOTH, FIRST. That is one of the reasons why we are unique and special. But no, let’s practice bitchy politics and divide the nation further. Sigh!
Today, some are trying to pit English with Bahasa Malaysia (BM) and vice versa. This was after the Prime Minister announced that BM must be used at every official function it is involved in, including at international meetings. The decision has its merits. Especially when in the past we had Ministers who presented in poor English that made us cringe. Bad for the Malaysian brand. Speaking in BM with confidence and passion can create an aura for the brand even if a speech has to be translated.
However, we must not forget the Malay proverb, “Masuk kandang kambing mengembek, masuk kandang kerbau menguak*”. There are times like during a bilateral or business meet, our delegation must speak impeccable English or the language of the other party to make a strong impression and win the deal. Use any language that helps us achieve our goals, not just our pride. That is why we suggest that English is complementary and not a competition to our national language. Ditto other languages like Mandarin and Arabic.
Our BM must be strong as it is the national language that unites us. But let us send the right message to all Malaysians, especially the younger ones, to master other languages too, especially English. We do not want them to lose out by being monolingual – especially our brothers and sisters in the rural and semi-rural areas.
Let Bahasa Malaysia anchor our hearts in unity but at the same time let English and the other languages be our wings to conquer the world.
Let us add value,
Have a meaningful Vaisakhi
* When in Rome do as the Romans do
Who is Sardar Joginder Singh Ji?
Sardar Joginder Singh Ji (1924 – 2018) wrote a book about Sikhism in Malay. His command of Bahasa Malaysia was so good that he was a lecturer to potential Malay language teachers. He was also proficient in English and his mother tongue, Punjabi.
Peace, anas
Posted by anas zubedy at Wednesday, April 13, 2022 No comments: