“WORRIES AND ANXIETY” about SITI KASIM 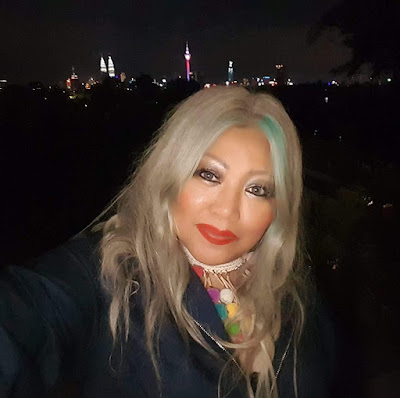 Siti Kasim is a friend.

Yes, she is loud. Very loud. She does not need any loud speakers. If we disagree about something even about the taste of the food served, be sure that the entire restaurant will hear her opinion. She may even give me ‘the finger’ followed with a four-lettered word but always accompanied immediately with her roaring signature laughter that will ring all over the room. No, she is not yelling. And no, she is not angry. That is her voice. She meant well. That is her style. She is who she is. She does not pretend. She is not a hypocrite. If you cannot handle that, just don’t join in. Just turn away lah…

But anyone who knows Siti will vouched that she is a wonderful and caring person. She is hard in the outside, but very soft in the inside. She has a very good heart. She is a friend that you can rely on anytime. She is fun to be with, a little unconventional perhaps but definitely a sunshine.

If you are in trouble, if someone bullies you, if you are poor and can’t afford a representation, if you are a marginalized group whose voice needs to be heard – you want Siti Kasim to be on your side. Siti at heart is a kind and good Muslim. The Prophet too fights for the poor, the marginalized and those in need. Siti represents that part of Islam in her colored hair and flamboyant style. Look at the substance and not the form … please.

As such, with all due respect to the good Perlis Mufti, Dr Asri, may I suggest you change your approach and target group. Instead of having an open dialogue, perhaps you can do the following.

Firstly, change your target group. May I humbly suggest that instead of dealing with Siti, you should aim your focus towards the Muslims who are too weak in faith and easily shaken, overly judgmental and some, outrightly dangerous.

Siti Kasim is a Muslim. She may disagree with the way mainstream Islam interprets the Quran, but she still uses the Quran as her guidance, her hidayah. In other words, the disagreement is about the interpretations. For example, the hair as aurat. Siti disagrees with the idea that the tudung is an important part of being a Muslim as she sees that there is no requirement to wear the tudung in the Quran. Her conviction is from her own understanding of the Quran. The Quran is still her hidayah! Whether she is right or wrong, I believe it is secondary to the fact that she found her guidance from the Quran. Even grand ulamas disagrees in many interpretations of the Quran – they too follow their own convictions. They too, use the Quran as their hidayah. Just like Siti Kasim.

Yet scores of Muslim due to Siti’s stand on some interpretation of the Quran and Islam have demanded that she is a murtad, anti-Islam, and many want her to be prosecuted and some has gone as far as wanting her dead!

For the benefit of those who are not familiar with Abu Lahab, let me provide some background.

Unlike Siti who is a Muslim, a lover of the Quran and the Prophet and not a foe of Islam, Abu Lahab is the only person from the enemies of Islam who has been cursed by name in the Holy Qur’an. Thus, he is the number one reference for all Muslims as far as an individual who can be considered a true enemy of Islam. How the Quran and the Prophet dealt with him should form the standard operating procedure on how to deal with individual enemies of Islam.

Although he was an uncle of the Prophet he staunchly opposed Islam from the very beginning till his death. A whole short chapter (Chapter 111 – Al Masad) of the Quran is about him and his wife.

“The power of Abu Lahab will perish, and he will perish.
His wealth and gains will not exempt him.
He will be plunged in flaming Fire,
And his wife, the wood-carrier,
Will have upon her neck a halter of palm-fibre.”
Quran 111: 1-5

The Quran predicted they will die a non-believer. In other words, they will be enemies of Islam till death. They will not change. Their hearts are locked. Yet, there were no prosecution, no shariah call to put them in jail. Instead, the Quran said that their punishment will come only during the hereafter. These two enemies of Islam who insulted the Prophet at every chance and yet there was no call for indictment!

According to historians, Abu Lahab and Umm Jameel brought excrements and offensive materials in the middle of the night to leave them in front of the Prophet’s home. All the Prophet did was announcing that it was a bad neighborly behavior and he simply threw the rubbish away. Umm Jameel is known to throw thorny bushes in the path of the Prophet to hurt him!!!

Abu Lahab made it his job to follow the Prophet wherever he goes when the Prophet share the message of Islam. He forcefully encourages people to not listen to the Prophet, to ignore him. At times Abu Lahab will chase and throw stones at the Prophet to stop him from spreading the message. Yet again, there was no calls to prosecute him. No shariah law thrown at him, no sedition and no death threats. Just Allah, promising he and his wife will suffer in the afterlife.

Today, a simple cartoon depicting The Prophet in a wrong way can make thousands of Muslims go out of control rioting and running amok. Some died during the madness - wasteful unnecessary deaths! It is obvious that we have failed to deliver and explain the Quran to the average Muslims.

In Malaysia, Siti Kasim’s non-tudung colored hair or a celebrity’s tight clothing can make many Muslims go into conniptions. A tudung clad female politician like Nurul Izzah is not spared either! A touched a dog campaign causes unnecessary fear to a kind-hearted Muslim like Syed Azmi who oozes with love and compassion. Have our religious leaders failed to explain the Quran and stress on the core examples and values of the Prophet? Have we failed to advise one another patience and compassion?

“So by mercy from Allah, [O Muhammad], you were lenient with them. And if you had been rude [in speech] and harsh in heart, they would have disbanded from about you. So pardon them and ask forgiveness for them and consult them in the matter. And when you have decided, then rely upon Allah . Indeed, Allah loves those who rely [upon Him].”.
Quran 3:159

“There has certainly come to you a Messenger from among yourselves. Grievous to him is what you suffer; [he is] concerned over you and to the believers is kind and merciful.”
Quran 9:128

To understand how kind and compassionate The Prophet was, history showed that Abu Lahab’s own children who survived him later converted to Islam and became fervent proponents of Islam. Would that have happened if the Prophet behaved otherwised?

I pray the good Perlis Mufti and all other religious leaders share and stress the Prophet’s way of compassion, kindness and sure faith in Allah and the Quran when dealing with challenges. Leave Siti Kasim alone, build each own’s Iman. Siti is just a Muslim who say outright what she feels and think about Islam. Many others feel and think the same but do so less loudly. You don’t have to impose your interpretation of the Quran at her. That is her choice. If you worry your children or others terikut-ikut  with her understanding, spend more time strengthening their faith not picking on Siti and the likes.

She is no Abu Lahab. Even individuals like Abu Lahab and his wife, the Quran ask us to leave them to God’s discretion. Stop persecuting and hounding people because of their ideas and interpretation of the Quran. Stop forcing your thoughts onto others. Practice Quran 2:256. Believe with all out hearts that there should not be any compulsion in religion. Between Muslims and Muslims and between Muslims and Non-Muslims.

Have a closed dialogue instead.

Secondly, instead of having an open dialogue, have a closed one. Get to know Siti Kasim, since you are interested. See through the form, look for the substance and discover her heart. Spend time with her when she goes into the jungle to care for the Orang Asli and fight for the poor. Chat with her about how and why she sees Islam the way she knows it today. The good Perlis Mufti must remember, when Siti talks about Islam she is not paid. She earns money by being a Muslim, not preaching Islam. She earns her income through her work as a lawyer.

And as I suggested at the beginning of this article, she is a friend and I know her. Even when she struggles with money, she helps the poor. I know that for certain. Siti works hard pleading here and there for funds to do good for those without power, without representation. She is not in it for the money! That is a sign of a true Muslim. The good Mufti must remember, when he speaks about Islam, he is paid a wage. Siti is not. We need to give due recognition to those who spend their own money spreading their conviction about Islam.

Last but not least, when you dialogue about Islam and the Quran with Siti Kasim or anyone for that matter, I plead you enter the dialogue as an equal. That is the basis of any dialogue. As the Quran says,

And if whatever trees upon the earth were pens and the sea [was ink], replenished thereafter by seven [more] seas, the words of Allah would not be exhausted. Indeed, Allah is Exalted in Might and Wise.
Quran 31:27