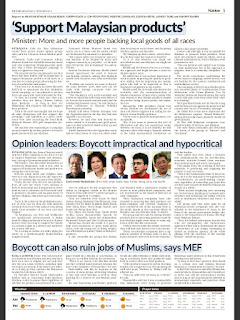 We, a group of concerned Malaysians would like to urge Malaysians to buy Malaysian-made products and brands first.

On the onset, the calls for buying Muslim products first or boycotting products made by non-Muslims may seem smart to some segments of the Muslim community. If they were to study this deeper, however, they will find such moves to be very unwise.

Many non-Muslim companies have a significant number of Muslim staff. In fact, in many instances, they even form the majority. Even when a business is predominantly run by non-Muslims, economic activities form chain reactions that involve each and every community. This ranges from the sourcing of the raw materials, to producing and supplying the product to end customers. That is the fundamental basis of the economy, be it at the national or even global level. Furthermore, all profit-making companies, regardless of ownership, pay taxes that are then used towards the benefit of the Malaysian society as a whole. These include employing and sustaining our civil servants, building our national infrastructure and enhancing our public services such as healthcare, education and more.

If anything, the taxes paid by all Malaysian-owned companies have also contributed to the betterment of Islam through the annual government budget allocation to JAKIM. Thus, it is indeed unfortunate that the few who are propagating this exclusionary approach either fail to understand the basics of economics or are simply attempting to spread an insidious agenda; all while playing with the emotions of the average Muslim.

We want to remind them that Malays and Muslims hold a substantial number of shares in most public-listed companies. They are also represented on the board of directors of these companies. Most Malaysian companies have also invested in ensuring that their products are halal-compliant and certified. Malaysia is now considered one of the top halal hubs in the world, thanks to the concerted efforts of Muslims and non-Muslims alike.

Any boycott would only hurt fellow Malaysians, Muslims included. We must support all Malaysian brands and products in order to make our economy stronger. Boycotts along racial and religious lines are not only impractical but also hypocritical in the modern-day economy, given the fact that all of us use products from all over the world. From clothing to food, to technology and transportation, every item we use or consume could be traced back to producers, founders and manufacturers of various religions, ethnicities and even nationalities. Such is the nature of the globalised economy. So how can we then say with absolute certainty that we are only using or consuming goods from members of our own race and religion?

As Malaysians, our lives and livelihoods are significantly interconnected. A Malay makcik selling nasi lemak in front of a Chinese factory every morning to support her family is a common sight in a diverse and multi-ethnic country like ours. So is seeing an Indian roti seller plying his wares in a predominantly Malay-Muslim neighbourhood. Are we willing to let this uniqueness that define us disappear thanks to the divisive rhetoric of the select few?

We strongly believe that rather than boycotting and dividing ourselves further, we should enhance our integration and practice more diversity and inclusion in our daily living. Our goal should be helping Malaysian businesses to grow, to keep prices down, to curb the cost of living emphasizing affordable but quality Made in Malaysia products. In that way, we as Malaysians, regardless of race, religion or background will prosper and grow.