A stronger Islamic flavour after GE13? 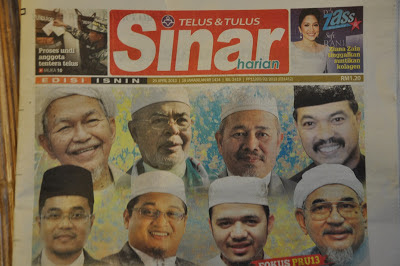 The above are headlines taken from Sinar Harian 29th April, 2013. While the front page reads, “ Ulama Bukan Penentu” and the editorial “Tiada Jaminan Ulama Menang”, all the cover stories inside the daily suggest otherwise. I wanted to post this article earlier but each time I talk about Islam and politics in Malaysia many were quick to suggest that I do so because I want to scare away the non-Muslim voters. As such, I decided to post this letter only after the elections, today after 5 pm, May 5th.

That Malaysia will turn more and more ‘Islamic’ is a foregone conclusion. I will share two main reasons for this; one being local while the other, global.

In Malaysia today, the Muslim majority are giving birth more than the rest. Owing to this rate, by 2050 the Muslims should occupy about 70 % of Malaysia as compared to the current 60. A recent survey about young Muslims aged 15 to 25 years old in Malaysia published on the website of Merdeka Centre reports that more than 70% of them aspire to adopt the Islamic way of life as part of theirs and desire to see the society move forward in the same manner. These statistics I am putting forth are more than just numbers; they indicate where Malaysians are heading and how that journey is re-shaping our nation.

At the global front, while by the 80s and early 90s communism and nationalism being two of the forces obstructing world dominion by the USA were no longer in position to post any challenge to Washington, the Iranian revolution of 1979 thrust Islam to the fore both in national and international politics. A decade later, 1989 saw the Mujahideen’s victory over Soviet Russia in the Afghanistan. This success showed that Muslim resistance by a small, organised, determined and united group of faithful can resist and defeat a superpower.

A new kind of confidence and consciousness were injected within the Muslim world.  Muslim revivalism that started in the nineteenth century experienced a new vitality.  Muslims especially the young re-thought, reflected, and brought back to life their rich and forgotten history into present memory rekindling the spirit of their own golden era.

Furthermore, events in the Middle-East especially the treatment of Palestinians by Israel and its allies and the double standard practice by the West towards Muslim nations serve as a constant fuel in increasing Muslim consciousness. Muslims today see and want Islam to be a possible alternative in managing people and the nation. Malaysian Muslims too share these ideals.

As Malaysia move slowly but surely towards Islam, we must ask ourselves what face of Islam do we want to create. Whether the Muslim direction is led by:
GE 13 and the various possibilities

The results of the GE13 can play a significant role in making the move towards ‘Islam’ is hasten or slowed. It will also determine which shade of Islam will colour the nation and which of the above 5 equations will evolve.

Item 1 above is where we are today. Contrary to popular understanding and believe, DAP and MCA are not the main obstacle to Malaysia turning into an ‘Islamic State’ –making Shariah supreme. It is UMNO. Don’t get me wrong, UMNO is also Islamic but the mentality of UMNO leaders does not subscribe to the concept of “Islamic State” as it is popularly subscribed. We can say that UMNO is more like Turkey (Kemalist Atatürkism in ideology although the ideology has a much stronger neutrality towards religion as compared to UMNO’s Islam) rather than like Saudi or Iran. In other words, the last bastion in keeping Malaysia secular is UMNO, not DAP or MCA. Until UMNO is too weakened or decides to go Islamic, we will remain as we are. However, even as it is today in UMNO’s Islam, Shariah is inching into our system, slowly but surely.

Should PR win hands down today with PAS gaining the lion’s share in terms of seats, we will shift towards a more PAS oriented Islam as per item 2. DAP can play a small role in slowing down PAS but it is unlikely that they can do much. PKR Malays will toe the line as their position is beholden to PAS. While with UMNO as the lead we are inching our way into Shariah, we will move a yard at a time when PAS is at the forefront. Nationally we will be more and more like Kelantan and Kedah with stronger presence of the government in moral policing. Shariah will be embedded into our secular arena. One cannot fault PAS for this as they are being true to themselves and their goal towards forming an Islamic state has been stated with consistency and clarity all these years.

If however PAS lost out in a major way in this election, with UMNO gaining major grounds, it is not unlikely that there will be an implosion within PAS. The pro-Unity faction will gain strength and we cannot deny the possibility that an UMNO- PAS merger may take place. If this were to happen, as per item 3, an UMNO-PAS hybrid would see Islam move faster than Item 1 but much slower than item 2.

The scenario as per item 4 is interesting. This could take place if we face a hung parliament or where PR wins more seats, but BN is still legally and formally the biggest party in parliament. In such a situation, the YDP Agong by law must offer the Prime Ministership to UMNO-BN first, until such a day when parliament is called (within 60 days). Then PR can initiate a vote of no confidence towards the Prime Minister. However, between the 60 days, there will be a lot of negotiations – BN/UMNO can try to strike a deal with either PAS, PKR or DAP to meet a simple majority. Here PAS will have a very strong leverage over UMNO. If PAS is true to its goal, the main condition for the merger must be the implementation of Shariah. UMNO in desperation to keep to power may comply. This is the fastest way to go towards the ‘Islamic state’.

Item 5, would be anyone’s guess.

What do Malaysia need?

If Islam is going to overwhelm the flavour of the country, we need to ensure that the face of Islam that we see here is one that is inclusive and moderate. We need leaders regardless of political leaning not just from UMNO or PAS; not just in politics or in business but also in the public sector, civil society, and the NGOs that have inclusiveness at heart. We need those that practice Wasatiyyah - The Middle Way.

We need leaders who are strong advocate of racial and religious harmony. We need Muslim leaders who are inclusive and moderate, open, compassionate, intelligent, and able to mix around with people from all walks of life.  We need a leadership that can explore the dynamics between the Muslims and non-Muslims, support gap-bridging effort that cuts across all races and religions.

“And among His Signs is the creation of the heavens and the earth, and the variations in your languages and your colours: verily in that are Signs for those who know.” – Quran 30:22

“O mankind! We created you from a single (pair) of a male and a female, and made you into nations and tribes, that ye may know each other (not that ye may despise (each other). Verily the most honoured of you in the sight of Allah is (he who is) the most righteous of you. And Allah has full knowledge and is well acquainted (with all things).” - Quran 49:13

PAS lost badly in this election because they only talk about hudud. People are more interested in the economy than religion. I already can foresee that PAS will lose Kedah with their silly action of forbidding the chinese saloon to cut men's hair, 50% bumi quotas for housing, etc. Also Azizan has not done much about the economy to Kedah. Important thing is to create jobs in Kedah and bring development. It is not about men lining up one side and women the other side, or women wearing tudung. All these are only superficial things. These are not so important thing. Important thing is justice, equal treatment for all, eradication of corruption and progress.

Anas, have the results of GE-13, especially for Kedah and other states (except for Kelantan) shown that the majority of Malays favour the UMNO brand of Islam (and nationalism) rather than that of PAS?

That's really interesting, regarding UMNO being the biggest stumbling block to a truly Islamic state.
I thought it was otherwise - that UMNO's brand Islam is one that can be accepted by a multi-religion/multi cultural society, but I could do with more readings and research I think XD

But what do you think of PKR (or rather Anwar's) stand on pluralism when it comes to religion? Would be beneficial to Malaysian Muslims, or would it prove to be a menace in the future?